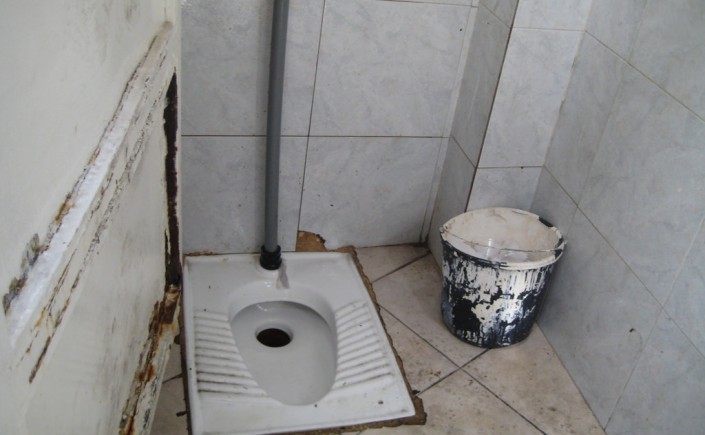 I slept fitfully in Ulleri—my stomach was bothering me. I kept waking, in starts, to my stomach bubbling, or gas escaping.

It was cold outside—we were in a trekking lodge in an elevated mountain village, after all—and I didn’t much want to get out of bed. I was cocooned in a cheap sleeping bag I’d rented in Pokhara, but it was cozy enough, especially after an exhaustive day of trekking. I wasn’t going to leave until I had to.

Every time I woke up, I’d have a little swig of water, and try to go back to bed. By the third or fourth time it happened, it was getting exasperating. I really wanted to get some rest, especially if tomorrow was going to be as strenuous as our first day had been.

The fifth time I awoke, I immediately knew something was different.

Did that—I paused, moved around a bit. Yup, I thought to myself. That just happened.

I had, without a doubt, just shit my pants.

Torn halfway between disbelief and laughter, I quickly became alert.  I was in a shared room, and I needed to deal with this. As quietly as I could, I got out of my sleeping bag, grabbed toilet paper, stumbled into the hall, and towards the toilets—which were only a few doors down from where we were sleeping. It was some ungodly hour of the morning, and all was quiet. I didn’t grab pants or a shirt.

I shuffled down the dimly lit hallway to the toilets. I jumped inside one and locked the door, thankful for the safety and privacy the meager room provided. A single, bare lightbulb hung from the ceiling on an exposed wire. It was dim, but light enough for me to confirm that yes, I had done what I thought I did. Just a little—but in that situation, there’s really not much of a difference between a little and a lot.

Shaking my head in disbelief, I took off my underwear and set them aside. I was totally naked, squatting over a hole in this bathroom. I tried to keep my feet away from the most suspicious stains as best I could.

As I squatted there, alone, I thought about Anker’s words. “Dal Baht: 23 hour power, 1 hour down and sour.”

Something about the food had clearly not sat well with me.

What I had mistaken for anxiety throughout the day was actually my body trying to tell me something. I had been so focused on the trekking, the new places, and walking through the soreness in my legs, that I hadn’t spared a thought for what my stomach was doing. It was pretty unavoidable now.

I squatted over the toilet, clutching my belly, and wondering what else could go wrong. Suddenly, the light above the toilet shut off, casting me into total darkness. In fact, all the lights shut off. The gentle hum of the generator, which I had not noticed until it ceased, lapsed into silence. Load shedding.

You’ve got to be shitting me, I whispered aloud.

There I was; 3 a.m.; in a remote village in Nepal; alone; squatting above a dirty hole in the ground; shit-stained underwear in my hand; and the power had just gone out.

I’m not going to lie to you. This is one of those moments where you have no other option but to really think about your choices in life.

These moments don’t come often, and they never hit when things are going right. Sometimes, people say, intense self-reflector is triggered by alcoholism or drugs—hitting “rock bottom.” For others, it’s a tough breakup. The death of a family member or close friend. All these things can cause one to stop and take a good hard look at their life. For me, it was shitting my pants,

So there I was, balanced precariously over a squat toilet. My legs were sore from six hours of hiking, and the ground was slippery for reasons we’re not going to discuss. Getting up was going to be a task, even with the aid of light. So I squatted there, in the dark, and thought about my life.

I gave up my girlfriend for this?

I could be home right now.

I could be smoking hash and playing chess in Pokhara.

Why did I come here again?

Have I really learned anything from all of this?

In between these thoughts, I was wracked with bouts of disbelief, jest, and silent spasms of laughter. What a truly absurd situation to end up in. I’d packed a headlamp—Holly had insisted I bring one to Nepal—but in my rush to escape embarrassment and get to the bathroom, I’d forgotten it in my pack. I also realized that I hadn’t brought a replacement pair of underwear.

Well, at least no one will be able to see I’m naked since the power’s out, I joked to myself.

The lodge was in total darkness. Absolute, pitch-black. Especially in the toilet: even after waiting for ten or fifteen minutes, venting my guts, I couldn’t see a single thing.

It’s not hard to imagine my mental state of mind was rather negative, here.

Eventually, as these things go, I started to feel a little better.

Load shedding can last for hours in the bigger cities, and we were up in the mountains. I figured the power wouldn’t come back on until morning, if that. So, ever-so-carefully, I began feeling around the tiny room for the door. With my hands planted against a re-assuringly solid object, I moved my feet off the toilet, and stood up, slowly, (slowly).

I shook my head for what must have been the twentieth time that night. Unbelievable. What is there to do, brother? I thought to myself with a wry little laugh.

I was beginning to become very fond of that phrase. It fit almost any situation.

What was there to do? Wash the underwear, and go back to bed. I took my underwear out of the toilet, and felt around in the hallway for the sink. Luckily, the underwear I had been wearing was a pair of synthetic, quick-dry Ex-Officio boxers, marketed at backpackers and serious travelers—the things are basically designed to be washed in the hostel sink. Another stroke of luck: there was a tiny bar of soap at this sink (something one can never take for granted in Nepal, and definitely not in the trekking regions). I took the soap and scrubbed the boxers best I could in the dark.

As I was doing this, the lights came back on. And suddenly, there I was, standing naked and exposed in a long, long hallway lined with dorm rooms. Scrubbing shit-stained underwear.

Of course, I thought.

I gave the boxers as good a wash as I could, rinsed them, and wrung them out. They still had a minor odor, but I was growing increasingly paranoid about being caught naked in the hallway. That was a conversation I’d rather not have.

What else was there to do?

I went back into the room, stashed the underwear in an exterior pocket of my trekking pack, and crawled back in my sleeping bag, silently shaking with laughter. I drifted off to sleep, wondering

What Have I Gotten Myself Into?

If you’re wondering about my FIRST great shit story, you can find it here. It’s equally absurd.

I promise this is the last time I’ll make you read about shit.

Leave a Reply to Dr B Cancel reply