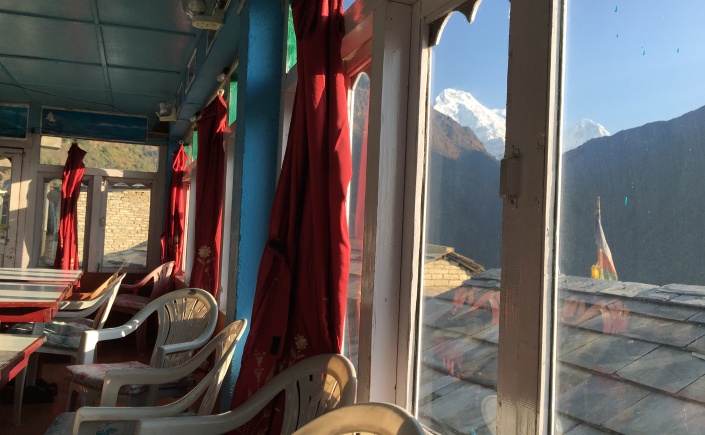 I awoke late. My restless night hadn’t afforded me much chance for good sleep, so when I’d finally drifted off to sleep, mortified, I hadn’t wanted to wake up.

A perfect sunbeam from the bedside window hit me square in the face, and my memory of last night came rushing back to me. It was far too vivid to have been a dream. I opened my eyes and glanced out the window.

It was an amazing bluebird morning, only small wisps of clouds to be seen. The sky was an almost ethereal blue color: so perfect it almost didn’t seem real. Behind the nearby mountains, a huge snow-capped peak showed its face. I sat up and stared in wonder. Although only a tiny portion was visible, the mountain looked like nothing I’d ever seen before.

That’s what I came here for, I thought.

The Malaysian was gone, which was good. I had gone to sleep naked last night. I hopped out of bed and got dressed, quickly. I poked my head into the hallway, which was deserted. I grabbed my underwear, took them to the sink, and gave them another thorough scrubbing with soap. I rinsed them out and put them back in the exterior pocket of my pack. I’d let the sun dry them while we trekked.

Pressing business taken care of, I ventured downstairs for breakfast. As it turned out, it was still pretty early. A few people sat around drinking tea or coffee, but no food was served. A few people were out on the terrace, looking at the same peak which had so mesmerized me. I left the lodge and joined them in the fresh mountain air. Anker materialized out of nowhere.

“Coffee?” he asked me. I nodded, tiredly. “Breakfast soon,” he said. I nodded again.

I thought my stomach could handle some food this morning.

It was a bit chillier than I’d expected, so I ran back inside to grab a fleece, Holly’s hat, and the cheap sunglasses I’d bought in Pokhara. They probably wouldn’t protect my eyes against UV radiation, but they were better than nothing.

By the time I came back downstairs, Anker had my coffee for me. It was a little weird being waited on like that, but I figured I may as well enjoy it. I’d decided to trek with a guide in order to help people; I was paying for it, so I may as well let him do his job.

I took the coffee and walked outside. I stood on the patio outside the lodge. I walked to the edge and rested my arms on the railing. The patio was hewn into the mountainside. Built out of stone, the same stairs we’d climbed yesterday dropped away right below my elbows. I stared out at the mountain, and sipped my coffee. The sun beat down on my face, and a light alpine breeze tickled the tiny beard I was beginning to grow. 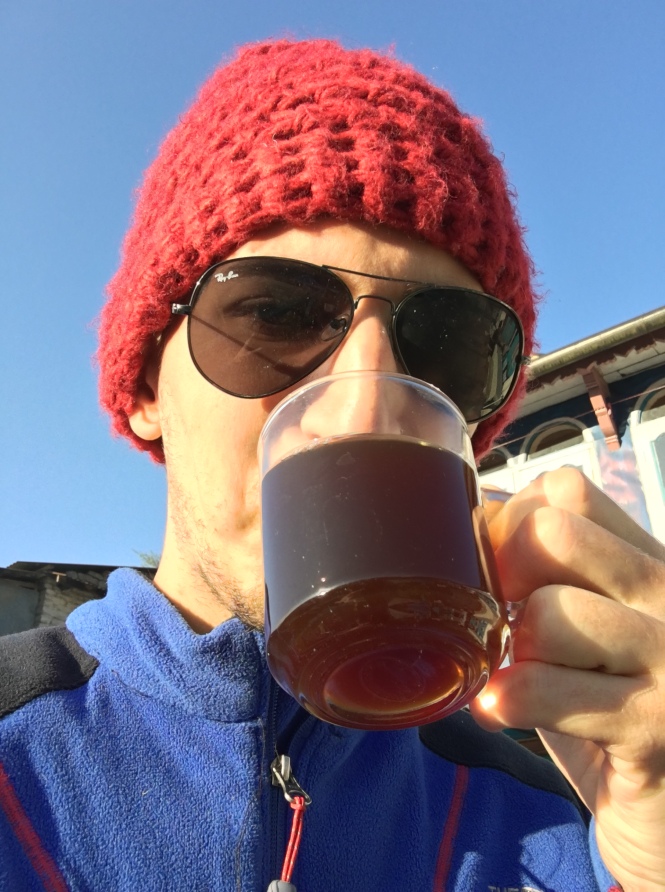 In this moment it didn’t even matter that I’d shit my pants the night before. In fact, in the light of day, it was so absurd as to be almost meaningless. Still, I wasn’t gonna tell anybody. That’ll be a great story when I get back, I thought. But probably not the best way to make a first impression on these guys I’m trekking with.

I stared at the mountain until encroaching clouds enshrouded it, then went inside to eat my breakfast. 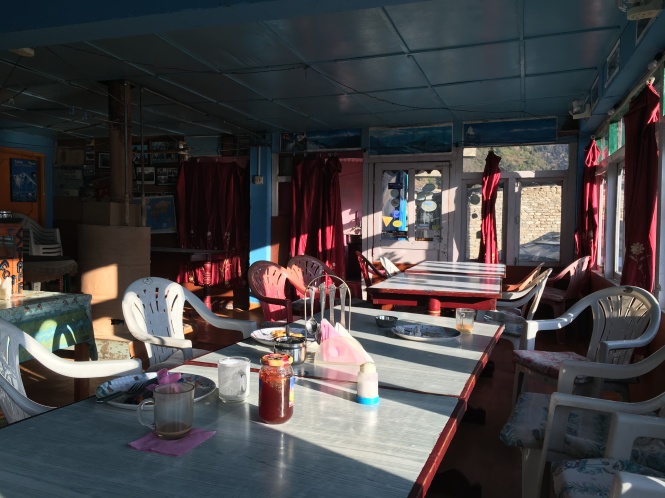 The breakfast table sat next to a wall of windows, which cast beautiful sunbeams all across the table. It made for a very pleasant, relaxing breakfast.

Before I knew it, it was time to go. Anker came over, totaled up the cost for everything I’d eaten, and gave me a bill. It came to no more than a few dollars, which I happily handed over. I was heartened by the affordability, although I knew costs would increase as we kept going up.

I found the Malaysian, grabbed my pack, and ventured outside, enthusiastic to get back on the trail. Last night’s disaster could not have seemed farther away.

One thought on “Nepal 67: The Morning After”