I was awoken after what seemed like three minutes.

Our guide had barged into our room. We were staying in a trekking lodge in Ulleri, also known as a “teahouse.” We’d been enjoying a well-earned nap after a tough first day of trekking. “Dinnertime,” our guide said cheerfully.

I shook the sleep from my eyes and glanced across the tiny room. My Malaysian trekking partner had apparently been taking a nap too, because he looked just as confused as I felt.

[this is a serial travel memoir about my experience traveling in Nepal. It’s best read from the beginning. Click for Chapter 1]

Our guide looked from one to the other, then said: “Downstairs. When you are ready.” With that, he ducked out.

I buried my head under the covers and considered just going back to sleep.

My stomach gurgled in response. It wasn’t exactly hungry though—in fact, I felt a little ill.

“I’m going to go to the toilet,” I said to the Malaysian. “I’ll meet you downstairs.”

He nodded, silently. He didn’t talk much.

I grabbed some toilet paper from my pack—having learned my lesson about always carrying TP in Pokhara,— and walked down the dimly lit hallway to the bathrooms. The lodge had one shower, a dirty sink, and a few toilets. I sighed as I opened the door—of course they were squat toilets. 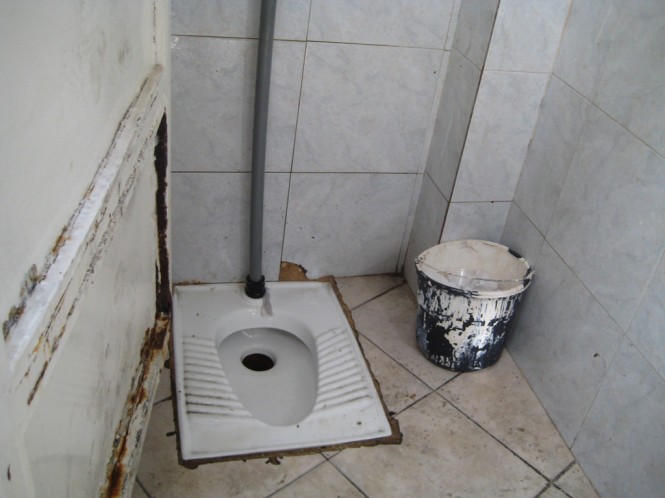 Here’s a squat toilet, looking, if anything, a little cleaner than the ones in Nepal. I looked, and unbelievably, I didn’t take any photos of the toilets while I was trekking.

Squat toilets, for the (blissfully) uninitiated, are basically just a hole in the ground. They’re quite common in certain areas of Asia, including, it seemed, Nepal. My quads screamed in protest as I squatted above the toilet—a position you should never have to use after trekking uphill for six hours. I almost fell over.

Still, as I washed my hands and walked downstairs, my stomach felt a little better. It was still a little bubbly, but I attributed that to nerves, foreign food, and anxiety.

Maybe a dozen people sat around in the lobby of the lodge, talking and eating. I recognized a few of them as people we had passed on the trail. The others were strangers to me.

One group was speaking German; a pair of guides were chattering away in Hindi, and an old couple spoke in hushed English, between spoonfuls of soup.

I spotted the Malaysian sitting by himself on the edge of a long table. I grabbed the chair next to him, at the head of the table.

“How’re you doing?” I asked conversationally.

“Sore,” he said. He had struggled towards the end of our day on the endless steps. Our guide had actually carried his pack the final thirty minutes or so.

Thank you! I yell inside. Finally, I know the guide’s name. Now I just need some clever way to get this guy’s name, I thought to myself, eyeing the Malaysian. So far I’d been getting by with “Hey!” and tapping him on the shoulder. It eased my guilt somewhat that I was pretty sure he didn’t know my name, either.

Anker materialized shortly with menus. They were almost the same as the one we’d looked at for lunch. I wasn’t feeling too  hungry, so I just ordered a ginger tea to try and settle my stomach. The Malaysian also ordered just a drink. Anker tried to encourage us to eat more, but we demurred.

He paused for a second, as if he wanted to argue more, but decided against it. He nodded, and briskly walked away.

The Malaysian and I sat in silence. I listened to the Germans next to us, who would occasionally lapse into English. I tried to follow the language, but it was hopeless. I had a few years of Spanish, some basic phrases in Mandarin, Thai, and Bahasa, but absolutely no German.

I may as well start paying attention now though, I thought, if I’m going to move to Austria.

The German language sounds harsh and guttural, but it is eased somewhat when the speaker is smiling and laughing, as this group was. They were clearly happy to be on the trail, up in nature, and away from the concerns of home. Amidst the German, I often caught the word “Trump.”

I was intrigued by what they were saying, but tired enough that I didn’t care to engage in conversation. Especially not with foreign strangers. We shared a few awkward smiles, Anker brought my tea, and I went to bed early, hoping my stomach would be feeling better in the morning.