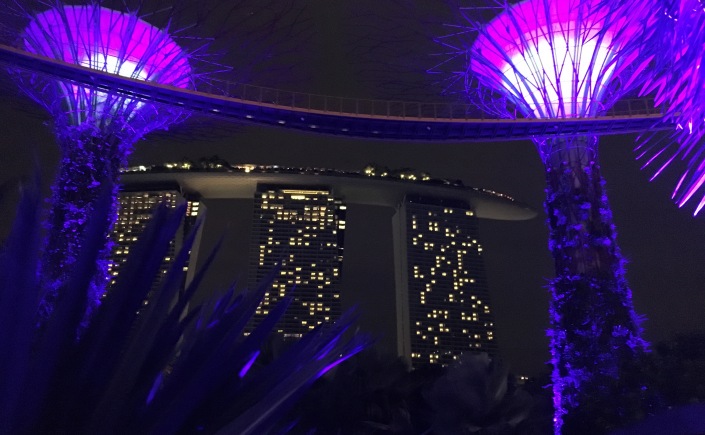 Wrenching my attention away from the paragliders, I looked back to my coffee. It was cold. I downed the ristretto in one shot, and chugged the remainder of the Americano. I opened my computer, and then immediately closed it.

I got up and asked the barista where the bathroom was.

He pointed outside the coffee shop, down the stairs. The complex had a shared restroom it seemed; Himalayan Java had no dedicated facilities. With some urgency, I ran back to my table, stuffed my computer awkwardly into Yanti’s rigid bag, and hurried off to the bathroom.

The restroom was a dirty, messy place: over-used and under-maintained, as public bathrooms often are—even in developed countries. There were two urinals (‘Men: Please stand closer, it is not as big as you think’), one squat toilet, and one western-style toilet. I booked it for the western toilet, slammed the door, and let the coffee do its thing.

Nepal’s not the most sanitary place.

Whatever I’d had for dinner the last night had not sat well with me; the coffee just compounded things. Hygiene was my last thought as I vented my insides. I stared ahead the the graffiti on the stall door, and wondered if this was how I was going to die.

Of course, I didn’t die. After fifteen or thirty minutes or however long it actually was, I thought to myself: I think I’m ready for some more coffee now.

But here’s the thing about a poor rural country like Nepal: there’s no expectation of toilet paper in public restrooms. Neither the Annapurna Guesthouse nor the Hotel Snow Leopard had provided me with toilet paper—you were expected to buy it yourself from one of the small convenience-store-type stands. It was cheap and easily accessible, but crudely put: in Nepal, having something to wipe your ass with was your responsibility.

I had some toilet paper, back at the Hotel Snow Leopard. But again, when you’re in a heartbroken haze wandering around a foreign country, sometimes the basic things can slip by. I hadn’t brought any with me, and there was none in the stall.

After a minute of panic, I opened the stall door and poked my stooped head out, looking for a paper towel dispenser. Nothing. Not even an electric dryer. Fuck.

I sat back down, pragmatic.

I wasn’t getting up. I had at least a two-kilometer walk back to the Hotel Snow Leopard, which meant this was a problem I needed to solve now, not at the hotel. I took stock of my resources.

My resources didn’t consist of “two joints of marijuana millions of genitals an unpublishable private literature that jetplanes 1400 miles an hour and twentyfive-thousand mental institutions,” as Alan Ginsberg wrote in “America,” one of my favorite poems in Howl.

What I did have was my beloved copy of Howl; the thick leather bag I’d bought from Yanti; a few ratty pieces of Nepali currency; an iPhone6S; a MacBook Air; and little else. I dug through the compartments of Yanti’s bag, looking for anything I’d overlooked. The main compartments didn’t contain much: just electronics equipment. The epherma of a digital nomad. Not much good for a basic human situation such as this.

Just as it was looking like I’d have to pilfer some pages from Howl, I remembered the bag had a zippered pocket on the back for papers.

I unzipped it and pulled out a few envelopes and pages of memo paper. I turned them over, and laughed out loud.

The papers were from the Marina Bay Sands. 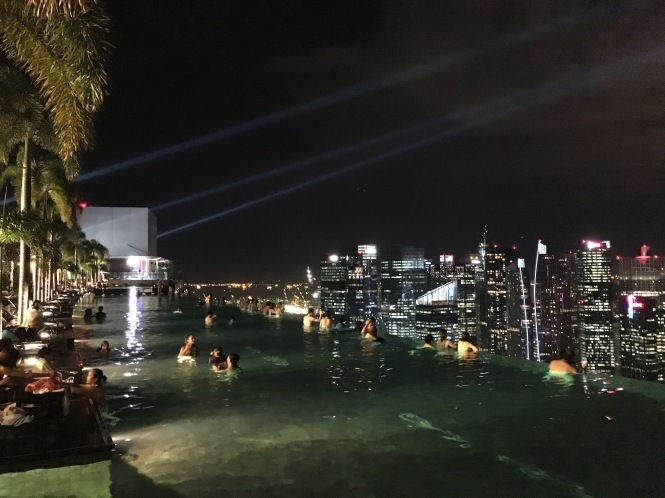 It was a funny situation, really.

The Marina Bay Sands is a five-star hotel in Singapore, famous for being home to the world’s largest rooftop infinity pool. It’s a massive, iconic Singapore landmark; one of those luxury vacation destinations which you see in those stupid little Facebook videos, thinking there’s another amazing place I’ll never be able to go. I’d taken Holly to the Marina Bay Sands for her 25th birthday, just three months prior. It had been the nicest place either of us had ever stayed. It had the feeling of a fairy tale.

One night at the Marina Bay Sands had cost about a month of lodging on a backpacker’s budget, but sometimes in life, you just gotta go for it.

Holly had told the receptionist it was her birthday, and he’d bumped the two of us—scruffy backpackers sticking out like sore thumbs amidst the hordes of holidaying Indian families, professional gamblers, and high-end business travelers— up to an executive suite on the 51st floor. Our room overlooked the Bay. Holly couldn’t stop smiling. I felt optimistic.

A month after her lack of money had driven a huge rift between us, it was odd to be celebrating Holly’s birthday in such an extravagant place. To me, at least, it seemed like a good way to say that the friction between us wasn’t about the money; that I wanted her to stay with me, and to be happy. To her, it may not have looked that way. Maybe it looked like gloating. A tease of what could have been. As I sat on the toilet, I turned over the envelopes in my hands, thinking about the different ways in which two people could experience the same moment.

Back in Nepal, I chuckled to myself, again, at the absurdity of the situation. From romantic 5-star luxury in Singapore to being lost and alone, struggling with basic hygiene in one of the least-developed countries in the world. The two experiences could not have been further apart. Yet here I was, somehow bridging the gap. My life spun between those two moments. Only three months separated the markers, but they felt like they belonged to two totally different lifetimes. I looked at the pieces of paper I held in my hands. The paper was creamy, the lettering gold. They were embossed with the logo of the Marina Bay Sands.

I could stay for 100 nights in Nepal for the cost of one night in the Marina Bay Sands.

Maybe that would have been a better use of the money. I could have extended my trip, and Holly’s. But I’ve always been a fan of big gestures. And they’ve got real nice toilet paper at the Marina Bay Sands, I thought to myself, chuckling.

Singapore had been a special moment. When Holly and I first started discussing travel, she’d shown me a picture of the Supertrees at the Marina Bay Sands. I want to go there, she’d said. I’d agreed, but in my head it seemed a million years away. An unachievable dream.

And yet, come that birthday, there we were. We’d sat in a hot-tub on top of one of the world’s most exclusive hotels, and gazed out across the grove. We’d stood at the base of those trees, at midnight, and kissed.

I’d taken the notepaper and envelopes as souvenirs, and as a reminder that it didn’t take much more than a little bit of courage to achieve your dreams—even the ones that seemed impossible.

They’d ridden around in my bag, forgotten, for the past few months.

Now, sitting on a toilet in Nepal, I held the Marina Bay Sands letterhead in my hands, and the memory in my mind. I laughed at the thought of what I was about to do, but there wasn’t really any other option. I’d had a great time at the Marina Bay Sands, and I’d hold on to the memory forever, but ultimately, as Sujan had said, what was there to do, brother?

I saved one envelope and one piece of letterhead each.

I wiped my ass with a five-star hotel, and walked back onto the impoverished streets of Nepal.