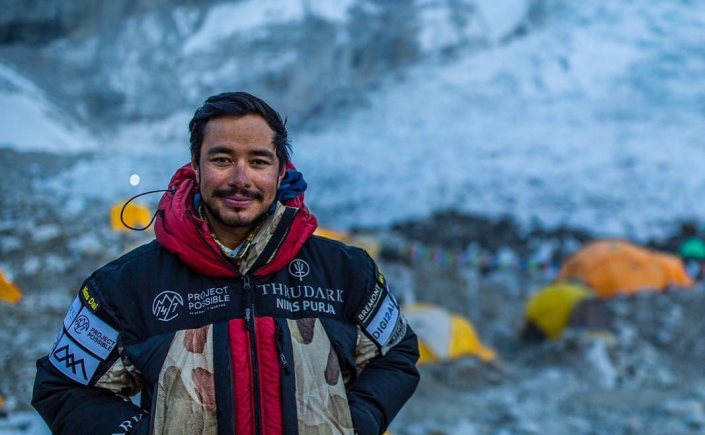 There was a viral photo last week, showing what appeared to be hundreds of people waiting in line on the summit ridge of Mount Everest.

I won’t share that photo here, as I haven’t paid for it. A quick Google search will turn it up if you haven’t seen it yet.

The man that took that photo was Nirmal Purja, a.k.a. Nims. Nims is a Nepalese climber who served in the British Gurkhas, and has been awarded the Member of the British Empire by the Queen of England for his accomplishments in high altitude mountaineering.

You may have seen his picture. But you don’t know Nims’ name.

That’s because Nims is Nepalese.

Nepalese labor has long been the backbone of the Everest climbing circus. These guys establish the route at the start of Everest climbing season, carry the supplies from camp to camp, shoulder the more serious risks, and carry out most of the rescues.

Part of this is genetic: the Sherpa are genetically superior performers at high altitude. Evolution has made them this way. After generations of living in the high mountain valleys, their bodies have adapted.

But the vast majority of it is economic. Nepal is one of the poorest countries in the world. High altitude mountaineering is the best paying job in the Everest region. Sherpa are cheap, and there are always more of them. When the Sherpas started demanding higher pay, tour operators started importing lower-paid labour from other regions of Nepal, or even Pakistan.

Nepal’s per capita GDP was $2,700 USD in 2017, according to the CIA World Factbook. The average cost for ONE client to climb Mount Everest in that same year was $45,000 USD. Hundreds of climbing permits are issued every May, representing millions of dollars for many, many stakeholders. So it’s easy to see why Sherpa may be forced to work on the mountain.

The commercialization of Mount Everest by rich Westerners who are willing to pay huge sums of money has had an interesting side effect though:

The Rise of Nepalese Climbers

At some point in the past ten years, there has been a shift of attitude in the young Nepalese who work on Mount Everest. The Sherpa saw the endless parades of Westerners coming to the mountain, being guided up along fixed lines like sheep (again, see Nims’ photo), using ladders, fixed lines, and oxygen the Nepali workers had installed ahead of time. Those Westerners were then being treated like conquering heroes in the press, and back home.

The reality is: the Sherpa are the real climbers.

Any Westerner who summits Everest via the standard ridge owes at least 50% of their success to the high-altitude workers who carry loads from camp to camp, and especially the “Ice Doctors”, who set the route through the highly dangerous Khumbu Icefall between Base Camp and Camp 1.

In 2014, 16 Sherpa workers died when a serac collapsed in the Khumbu Icefall, sparking outrage in the local communities and leading to the cancellation of the entire climbing season. The next season, in 2015, a massive earthquake struck all of Nepal, resulting in yet more fatalities at Everest Base Camp.

These two events, combined with the spread of Internet access and LTE signal to the more rural areas of Nepal, sparked a change. Nepali climbers realized: hey, we’ve summited this mountain more than anyone. We are climbing in the best style, we are summiting every year, this is our home.

And yet, it was the Western climbers who are lionized by the media; the Western climbers who have easy access to sponsorship — and nary a word about the Sherpa, the Nepalese, the support staff without whom the entire endeavour would be impossible. Check out the little video below to get just a loose idea what these guys are doing on a regular basis:

A desire to take ownership of the mountain started to grow.

This younger generation of Nepalis started lower-cost guiding companies with the goal of taking back the economic ownership from the westerners (these cheap guiding outfits have sadly become part of the crowding problem), but some of them also became interested in “becoming climbers.”

Encouraged by initiatives like the Khumbu Climbing Center (which was initially founded by westerners, but has a vision of becoming 100% locally owned, operated, and instructed), some of these younger Nepali and Sherpa started to see climbing with the same passion as the Westerners. Climbing could be a goal, and a passion, instead of just a dangerous way to make money. That was a change.

Nepali climbers have long ago earned respect within climbing circles, but for the wider public, it’s a harder sell.

The first people to summit Mount Everest and return alive were Tenzing Norgay, a strong and experienced Nepali climber from the Khumbu Valley, and Sir Edmund Hillary, a beekeeper who cut his teeth climbing in New Zealand’s Southern Alps. Hillary, a Kiwi mountaineer, was received in London as a national hero: the embodiment of the British Empire’s drive to conquer the world. He was knighted. Tenzing, pushed to side, received the George Medal, not even the highest honour that could be awarded to a civilian.

Still, today, Tenzing is marginalized; even by our supposedly unbiased algorithms:

So Yes It’s All Very Unfair

There is much more to be told in this tale, but I suspect I’m boring you. So let’s get back to present day, and our friend Nims.

What was Nims doing up on that crowded Everest summit ridge?

Nims was climbing Everest as part of Project Possible, his bid to climb all 14 of the world’s 8,000+ meter peaks in a single year (7 months, to be precise). The current record for one person to climb all those peaks sits just under EIGHT YEARS.

These achievements put Nims on the cutting edge of modern alpinism. And yet, Nims’ dream is on the edge of failure.

Despite an impressive existing record in the Himalaya, including a number of Guinness World records, Nims couldn’t achieve full sponsorship for his expedition. Although big apparel companies like the North Face, Arcteryx, and La Sportiva regularly open their coffers to sponsor expeditions from Western climbers with considerably less ambitious and eye-opening goals, Nims has had to turn to crowdfunding.

Showing the foolhardy determination that has to characterize a mountaineer, (to some degree) he set off for the Nepal phase of his expedition without having secured funding to climb the mountains in Pakistan (the next phase).

So now, after having proved that six 8,000ers in a month were within his grasp, he faces an even more difficult challenge: raising £200,000 in just a few days.

Who knows if Nims will pull it together or not — the finish line is far away, and his time is short. But I can safely say that his incredible quest is worth far more attention than the crowds of barely-qualified climbers he took half a second to photograph, as he continued down from Everest, on his way to climb two more world-class mountains.

A few links if you’d like to dive deeper into any of the topics mentioned in this article:

P.S. I didn’t explain the distinction thoroughly in the article, but “Sherpa” is an ethnic group, not a profession. It refers to those who live in the Khumbu Valley (the Everest region). Sherpa make up the majority of mountain workers, but not the totality.

Nims is not a Sherpa, but he was born in Nepal. Nepalese citizens can serve in the British military through some arcane old connections, which is where Nims acquired the funny accent and probably a lot of his fortitude.

This story originally appeared on Medium.com.

4 thoughts on “The Colonization of Mount Everest”

Tomorrow is never granted!! Golden moments from February in Joshua Tree. Having these memories to hold on to has been a great comfort in the quarantine period. #livealifeyoulove #escalada
This photo was taken on the Honeymoon Chimney, in Castle Valley Utah, shortly before we entered what we are now calling “The New Normal.” ... My climbing partner and I banged out two desert towers in one day, including this one which was good and scary! It was an awesome adventure, which we had hoped would be the first of many. But, as we all know, the world changed. Priorities are different, and lately, there has been precious little of this type of thing. Which is understandable, and warranted. ... But damn, this was a nice day. It was my last good day, before all of this. What was yours?? ... Read “The Last Good Day”, link in bio.
Film expiration date: 3/1989. Photo taken: 1/2020. See more, link in bio.