2016 was a busy year for me. And beyond the calendar year, the last 18 months have taken me to 20 countries—that’s a lot of travel! It’s gotten to the point where my friends at home just automatically assume I’m abroad. When we do happen to cross paths, their first question is inevitably: where next?

The life of a digital nomad is enviable, in a lot of ways. Everyone I meet is curious about how I do it, what my advice is. Here, in no particular order, are 20 lessons I learned from visiting 20 countries:

Airplane Tickets Are Cheaper than You Think

When I took my first trip, I paid something like $800 for a one-way ticket from Denver to Thailand. Now, years later, I would never pay that much for a plane ticket—and definitely not a one-way ticket. If you’re paying attention to deals, you can pretty easily get a roundtrip ticket for less than that.

And travel from the U.S. to Europe?

Amazingly cheap. If you keep an eye on the deals, you can fly roundtrip from any major U.S. hub to most European countries for $300-$500, often on nice carriers. Even if you can’t fly directly to your destination, keep in mind—train travel and low-cost air carriers make moving around Europe (and Asia) extremely easy and cheap.

Don’t let the myth of the “expensive plane ticket” keep you from traveling. Often it’s just as cheap to fly to Europe as it is to take a domestic vacation.

Slow Travel is the Best Travel

You know the saying: “It’s about the journey, not the destination.” Nowhere is this more true than in long-term travel. If you can, take the train instead of a plane. And if you can, walk instead of taking the train. And if you don’t feel like walking? Just stay in one place, and soak it in for a while.

Travel isn’t a competition, no matter how much certain travel bloggers might make it seem that way. Nor should you care about the dick-measuring contest at the hostel, when the conversation between you and your new mates inevitably turns to who has visited where. I did 10 countries in two months on my Balkans trip last year—that was way too fast.

A three-day vacation to a beach resort will tell you nothing about a place, even if you do have the passport stamp to prove you were there. Spending a month or two living in one place, meeting the locals, and absorbing the daily rhythms of a place? That will teach you so much more, and stick with you for so much longer. Looking back on my travels, my favorite places are generally the ones where I spent the most time. 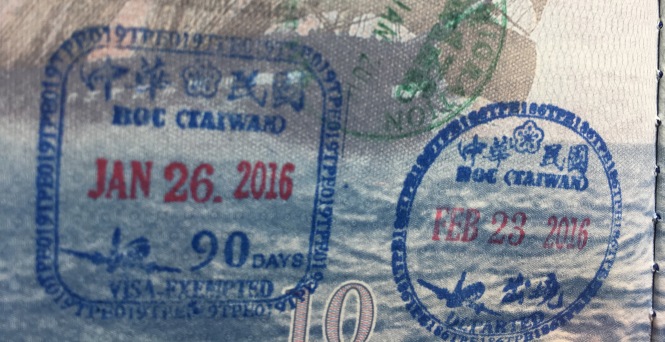 When you hit the road, there is something shocking that you’ll quickly realize. That revelation? There are a lot of people doing this. Like… a lot of people. And those people come from all walks of life.

Some work as servers or cashiers or other low-pay jobs; they worked for years and years and saved as much as they could, and now they’re off on their next adventure. Some people work as digital nomads while they travel, earning income to support themselves on the road. Other people are rich, and take their families with them. Some are taking a gap year after uni, while others have spent one lifetime already in the workforce, and are now looking for something new.

Some people are traveling for a week off work; others have been on the road for years without stopping. Some people live on $10 a day, while others stay in luxury hotels and fly first class. No matter where you are: there will be people to make friends with.

Words of wisdom on Copacabana Beach, in Dubrovnik, Croatia

A good buddy of mine took a trip to South America after graduation. Back home now, working away, he posited a question to me: “Are things better than experiences?”

It seemed an unlikely question to hear from a traveler.

His reasoning? “Pablo works all the time. And he buys a lot of nice things which last him forever, while I’ve basically forgotten most of my trip by now.”

Personally, I think in 30 years, you’re a lot more likely to remember the months you spent backpacking Asia than the years of Netflix you watched on your 60 inch TV. Science backs me up on this one. And my friend has come around too—he is now planning a new trip.

Opportunity cost is a real thing. Whether you’re quitting your job, taking a gap year, or setting off to live in a new country—all those actions come with big consequences. Chasing my dream to travel cost me a serious relationship. My climbing partner set off to travel about a year ago, fell in love, and never came back.

Your relationships with your friends back home will suffer, people will get married and break up, huge life events will happen, and you won’t be there. You may, in fact, be on a beach in Bali when a close friend needs a shoulder to cry on. And there is no getting around it: this will make you feel bad, even if you know it shouldn’t.

Go With The Flow

I’m a terrible planner. I don’t plan anything when I travel, and I wouldn’t have it any other way. In my experience, things are generally more enjoyable, fluid, and authentic when you don’t saddle your trip with too many expectations. Almost all of my favorite travel memories—clubbing in Sarajevo with a local woman we met on the bus, playing chess and smoking hash with an old Malaysian man in a café in Pokhara Nepal, getting stumbling drunk in Budapest at 8 a.m. on election day—were spontaneous adventures that I could never have planned for.

Travel Blogs are Full of lies

Travel blogs depend on selling you a dream, which isn’t ever totally accurate. Anyone who’s done long-term travel understands this implicitly, I think, but a lot of people reading these blogs are aspirational travelers. I know I was, before I set out on my first trip. My advice: take what everyone tells you with a grain of salt.

There’s a HORDE of Tourists Behind That Instagram Pic

That beautiful, deserted Thai beach you discovered on Instagram? Might be beautiful, but it’s probably not deserted.

I’ll plead guilty to this one. Take a look at the Instagram photo I posted from Kuta Beach, on Bali, above.

And now look what the beach behind me looked like when I took that photograph:

This photo, I feel, doesn’t even accurately depict the size and obnoxiousness of the crowds at Kuta. It’s the only one I took though.

Koh Phi Phi, in Thailand, is one of the most Instagrammed spots in the world. But the islands themselves have become so overrun with backpackers and tourists, everyone in the region recommends you avoid going there. It’s pretty, but it’s been ruined, people say.

Sometimes tourism is good for a place, but too much, and eventually it turns bad.

As a US citizen myself, I could have told you this just from observing my friend group. International travel is an exotic thing for many of them. As an American abroad, in many places, you will be the exotic thing.

Although our citizens might not travel much, our pop culture certainly does. I was recently in Iceland, where I met two guys on their way to study abroad in Italy. As we sat in a coffee shop and warmed our bones against the windy Reykjavik winter, one of the guys could not get over the fact that this coffee shop was playing Mumford and Sons. “That’s wild!” he said.

But really, it’s not. Ask any foreigner, and they’ll know all the American movie stars and pop idols. Hollywood has conquered the globe. Why? Because it has the best production values, people say.

My favorite instance of this phenomenon: a lot of the young Nepali guys I met love Justin Bieber. (Canadians in the comments would like me to clarify that Bieber’s actually Canadian).

That’s the first 10 lessons I’ve learned from traveling to 20 countries! Click here for Part 2! Did you like this article? Help me get the word out by sharing it on Facebook or Pinning it on Pinterest!