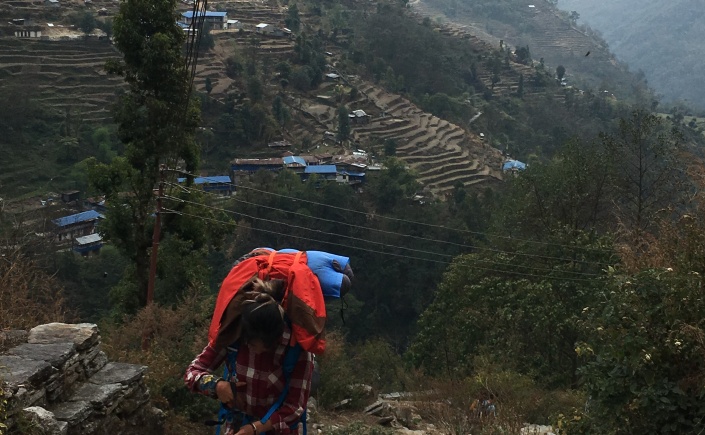 The stairs to Ulleri were never-ending.

We were off the dirt trail now, and climbing steep stone steps up, up, up. I had no idea who had made these stairs, or when; but whoever it was, they were clearly a sadist. Our guide remained silent on the topic, breathing steadily as we ascended slowly, slowly, towards our goal: the trekking lodges in the settlement of Ulleri.

We passed many other trekkers as we walked. Some were heading up, struggling just as hard as we were, while others were practically sprinting down the mountain: all strong legs and smiles after completing their treks.

We were on the route to Poon Hill—popular as one of the shortest, easiest treks you can take in the Himalayas. We would see Poon Hill on our third morning, and then turn towards Annapurna Base Camp. I hoped the majority of the trekkers would return home after Poon Hill, as the stairs were feeling a little too crowded for my liking. Elderly couples, families with young children, and inexperienced hikers clogged the trails and slowed our progress.

Our group was playing leapfrog with a colorful Chinese couple: a man wearing a striped blue jacket, and a woman wearing a bright red one. They were trekking independently, without any guide or porters. The man had strapped a bluetooth speaker to the outside of his pack, and was blasting music while he trekked. Overtime we passed each other, the exasperated and exhausted woman would ask our guide “how much further to Ulleri?” The man just smiled and kept walking. It didn’t seem he spoke much English.

The stairs went on and on. Struggling under the load of our heavy packs and the exhaustion of travel, the day seemed never-ending.

We walked “slowly, slowly,” as our guide encouraged us. Eventually, towards the end of the day, he got frustrated with our increasingly dreadful pace, and he offered to carry the Malayasian’s pack for him.

Our guide trekked with only a small daypack, while both the Malaysian and I struggled under the weight of huge, 70 liter backpacking packs. Those aren’t an easy thing to carry on flat ground, let alone up steep stairs at 2,000 meters above sea level.

After a seemingly interminable day of climbing, we reached our first teahouse of the trek. It was maybe 4 in the afternoon. We were showed to our room: two twin beds in a bare plywood box. It wasn’t much, but after a grueling day on the trail, it may as well have been the Marina Bay Sands. I laid my pack at the base of my bunk, and was asleep within three minutes.