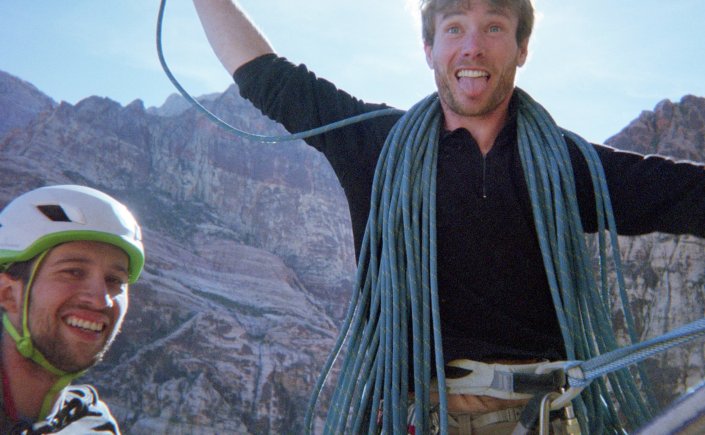 It was the final day of our climbing trip. Three weeks of uninterrupted time together: me y mi hermano Jose.

I had introduced Jose to bigger, more complex forms of climbing, while he had mentored me in Spanish, my second language. We had shared a soggy tent, shivered through a few cold January nights, spent half our budget on alcohol, eaten like dirtbags. Laughing, learning. We had made a strong memory.

But it was just about over.

We planned to end our trip with an exclamation point: climbing Birdland (5.7+) in Red Rock Canyon, a five-pitch route that would take us higher than anything we’d climbed previous. The route had been recommended to us by a free-solo climber we met in Joshua Tree.

Jose had been sad to trade Joshua Tree, where we passed almost three weeks, for Las Vegas.

I had pushed for Vegas. I wanted Jose to get a taste of real multipitch climbing. I wanted to get high — something you can’t really do in Joshua Tree.

In the end, I’d won. We drove to Vegas for a few days.

Our final day, we slept late and headed in to climb Birdland around noon. We stopped at the First Pullout in the Red Rock Loop Road, to look at some of the beautiful rock formations, and see if we could glimpse some of the sport climbing crags — shorter, bolted cliffs.

The rock at the Calico Hills in Red Rock Canyon is filled with swerving  lines: undulating waves of red, white, and shades in between. Without hurry, Jose and I walked the trails off the pullout, breathing in cool, fresh air. Despite being so close to Las Vegas, a major city with plenty of pollution, Red Rock feels crisp.

Walking back to la camioneta (our truck), three people around a small folding table waved us over. “Free food?!” they yelled. Dead broke after three weeks of too many cervezas, we swerved right over.

Two of the group were ambassadors for Climbstuff.com. The third, a guy in his late twenties or early thirties, was looking for people to climb with. We chatted for a bit while we ate bananas and tortillas.

“Well,” I say, “we were going to go climb Birdland, if you want to tag along. Multipitch.”

His face lights up, he thinks about it for a sec, and he says: “Yeah, that would be great! You guys got wheels? Just let me grab my stuff.”

Every inch of our truck besides the driver and passenger seats is covered in climbing, camping, and cooking gear.

As our new friend goes to hop in the cab, we hesitate: there might not be space, we say.

No worries, he says with a smile. I’ll dirtbag it in the back. In a flash, he clambers up over the tailgate and squirms his way into the back of the bed. He’s sitting on an assortment of irregularly-shaped metal climbing gear, but he doesn’t seem to mind. Jose and I hop up front. He gives us a slap on the window to let us know he’s good to go, and we hit the loop road, driving towards our climb.

The Red Rock Canyon Loop Road is a beautiful scenic drive, even if you never leave your car. Huge mountains rise out of the ground, serrated ridges rising towards the sky. It’s hard to focus on the driving, with those incredible mountains staring you down.

Jose and I can’t see his face, but looking backwards out the rearview, it’s easy to read the body language: our hitchhiker is smiling from ear to ear.

We hit the trailhead, park, divvy up our gear. Since climbing in a group of three is a bit more awkward than a group of two, we discuss our strategy, briefly. We agree to bring two ropes. The hitchhiker and I will swing leads, while Jose follows.

“Are you comfortable leading at this level?” I ask, although it’s not a hard route.

We hike in, exchanging pleasantries.

I ask him if he’s ever climbed in Eldorado Canyon, my favorite spot in Colorado. Yeah, he says, we just had a day or two passing through.

“We climbed The Naked Edge,” he says, casually. “We figured since we had just the one day, we kind of had to get on THE classic, right?”

That’s a hard route — much, much harder than Birdland. Any anxiety I had about climbing with this guy vanishes.

Soon we reach the base of our climb. It’s a clear day: sunny and windless. We could ask for no better end to our trip. I take off my shirt, rack up to climb, and start up the wall.

The climbing at Red Rocks is spectacular. The rock feels like a climbing gym: face holds are everywhere. We are climbing traditionally, placing protective gear in cracks, but mostly using the super-featured faces for hand and foot holds. After weeks of climbing featureless friction slab in Joshua Tree, Red Rock is paradise.

We progress quickly up the route. I lead the first pitch, the hitchhiker takes the second. I regain the lead for a touchy traverse on the third pitch, he takes the fourth. Jose follows us up all the way. I’m happy he has the chance to chat with a different climber, to see this guy’s style. After three weeks together, I’m worried Jose will have absorbed all of my bad habits.

The fifth and final pitch is an aesthetic, slanting finger crack. I take the lead, and it makes me sweat. Partially, it’s difficult: the holds have diminished. Partially, it’s scary: I’m hundreds of feet up. I can see the Las Vegas Strip, off in the distance. And partially, it’s hot — I left my shirt on the ground, and I can feel my pale back cooking in the Las Vegas sun.

Still, the sweat is nothing a bit of chalk can’t suppress.

I finish the climb, and bring up the other two. We are all three trying to stand on a tiny, triangular incut in the wall — one that provides MAYBE two square feet of footing. We are roped in, so we’re safe — but a touch uncomfortable.

He takes a glimpse at my back and confirms my suspicion.

“Ah,” I say with a shrug. “Totally worth it. Climbing multi-pitch shirtless in the dead of winter — that’s pure joy, brother.”

“I think it’s snowing in Colorado right now,” I add with a cackle.

Our new friend is coiling ropes, preparing to rappel down the same way we’d come up. My phone has been completely dead for days, so I take out the disposable camera I’d bought for the trip. I point it at the pair, snap a “summit” pic. Jose, hundreds of feet up and hanging off nothing but two bolts in a vertical wall, looks a little scared. Our new friend, the hitchhiker, looks absolutely chuffed.

It’s the last shot on the roll.

We descend with five or six single-rope rappels, and reach the ground just as the sun leaves our corner of the canyon. We drink some water, eat some small snacks.

Our new friend grabs a cigarette from his pack, lights it up.

“Nothing went wrong today,” he says in between drags. “That went fucking perfect.”

“That never happens,” he tells Jose with a laugh. “Ever.”

We walk out of the canyon in good spirits. Jose and I are out of beer, after three weeks on the road. The hitchhiker has two, which he shares with us, once we reach the parking lot. We chat a bit as the sun sets.

Satisfied, we hop in the truck, drive out of the park, and drop our partner off at his car. He’d left it parked outside the entrance gate, in order to avoid paying the entrance fees.

We each give him a handshake on the side of the road. His trip is done, too. He’s driving back to Utah that night, he tells us. “Thanks guys,” he says. “It’s kind of a pain, you know, traveling solo… but that was awesome. Have a great one.” He drives away, and that’s that.

I don’t even remember his name.

But that happy face will stick with me for a long while.

5 thoughts on “The Hitchhiker”