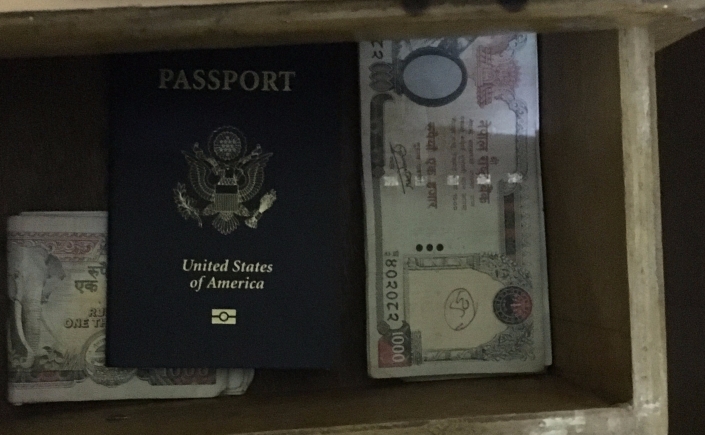 I bussed back to Kathmandu.

I returned to the Annapurna Guesthouse, which was just as empty. The owner had kept my sneakers for me. When I asked, he smiled from behind the reception desk, opened a low drawer, and handed them to me, wrapped up in a blue plastic bag.

I would be a little sad to be leaving my blue ‘North Face’ hiking boots here in Kathmandu. We had some memories now, they and I. But, since I had worked so hard to negotiate a rental deal on them here in Kathmandu, I thought I should at least return the boots and reclaim my $30. That money could buy souvenirs for everyone back home.

I swapped the boots for my sneakers and struck back out into the maze-like streets of Thamel.

I had written two sentences of directions on the back of my rental receipt, but these proved to be woefully inadequate. I wandered the streets of Thamel for two hours, looking for the shop from which I had rented the boots. All the trekking outfitters looked the same, and none of them would admit to renting me a pair of hiking boots. Once, I was pretty sure I had found the correct shop, but the woman I had made the agreement with wasn’t there. The young Nepali men minding the shop said no, absolutely not, they didn’t rent boots.

That was as close as I got.

In the end, a man called out to me, and I faltered. He drew me into his jewelry shop, where he started proposing trades for earrings and rings. “You got mom? You got girlfriend? Then fuck the money,” he said to me, as I tried to negotiate some money for the boots. “Money go,” he said, brushing imaginary bills off into the air. “These forever.” He waved a pair of earrings at me. “Mom, girlfriend — worth more than money.”

In the end, he got me. I bought several pairs of earrings. I walked into his shop hoping to get at least $20 for the boots, and I walked out without the boots, less $10.

I realized this wasn’t the result I had been hoping for. I thought back to something the old Malaysian man had said in Pokhara:

“You know what a scam is?” he had asked me, as we sat there in our hash haze, playing chess. “A scam is when you you think you got a good deal. Only later, at some moment, you go: ‘hey, wait a minute!’”

I found myself thinking hey… wait a minute… as I walked out the jeweler’s door, but at the same time, he was right. Fuck the money. I thought. These forever.

He had a remarkably good sales pitch.