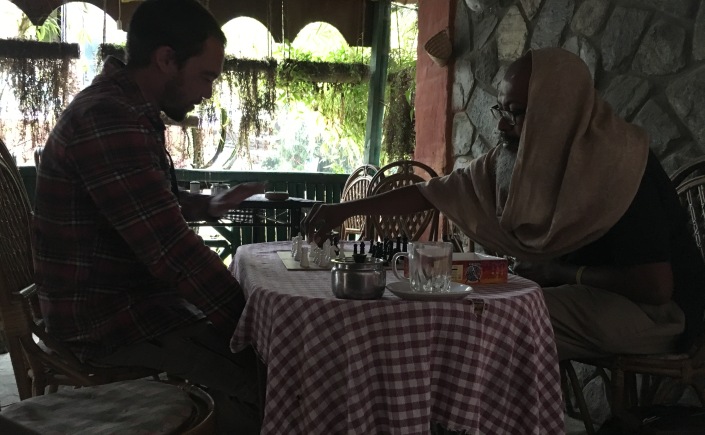 I had just been accosted by a stranger on the streets of Pokhara, Nepal. This man was no tout though, and his offer intrigued me.

“Do you like chess?!” The man had yelled at me, from the stoop of a nearby cafe.

Before I had even given it a second thought, my legs were taking me across the potholed street and up the steps, where I shook hands with my new friend: an old Malaysian man with an impressively white beard.

[Confused? This is a serial travel memoir. You’ve found us some 30,000 words into the tale. Start here, then catch up! It’s quite the story, and I’d love to have you along for the telling.]

He greeted me the way almost everyone does in Nepal — with a “Hello, my friend! Where are you from?”

But instead of allowing me to answer, he held up his hands and said: “Wait, no, do not answer. I like to guess.”

“Malaysia,” he said, with a mischievous smile. “Do you know where that is?”

“The Petronas Towers are magnificent. But the rest of the city felt a little seedy to me,” I said, diplomatically.

“Yes, yes,” he said absentmindedly. He scooped up a black pawn and a white pawn, put them behind his back, and held out two closed fists to me. I tapped his left hand, which he opened to reveal a black pawn. He smiled.

“Ah black. I go first, I go first.” He started grabbing pieces then, pausing and changing his mind, said: “You may play white, I prefer black.”

I gracefully insisted he play white, and he acquiesced.

He made a funky opening move with his knight, and I moved my King’s pawn forward two spaces. His second knight came out; I moved my King’s bishop into the middle of the field– my standard opening when playing a new opponent.

“Do you really want to try the four-move checkmate on me?” he asked, raising an eyebrow.

“I don’t know how good you are,” I said with a chuckle, as he moved to block my bishop. I retreated one space. He moved a pawn up two spaces, again threatening my bishop.

“I invited you to play, and you think I do not know the four-move checkmate?”

I shrugged. “We are getting to know each other.”

“Aha! You are American!” he exclaimed, causing me to jump.

He nodded. “Which part are you from?”

“Colorado,” I said. He greeted me with a blank stare. Most foreigners don’t know the US beyond New York and Los Angeles. To be fair, I didn’t know Malaysia beyond KL and Penang. “The Rocky Mountains?” I asked. He nodded, recognizing or at least pretending to recognize the landmark. “I live in the Rocky Mountains. Middle of the country,” I said. I pulled out my phone and showed him a photo of snow-capped peaks, taken the year I lived in Vail.

The Malaysian kept pressing his attack, and soon my pieces were huddled in a defensive triangle. He had expertly taken advantage of my early over-reach, and pushed me back into a turtling position.

My pride a little hurt, I stopped talking and turned my attention to the game.

I was able to regain a little ground as we furious traded pieces, opening up the board for the endgame. In the end though, he eliminated all my pieces, and I was forced to yield.

I reached across the board and shook his big, leathery hand.

He cracked a big smile. “Yes, again!” he exclaimed, as we reset the board.