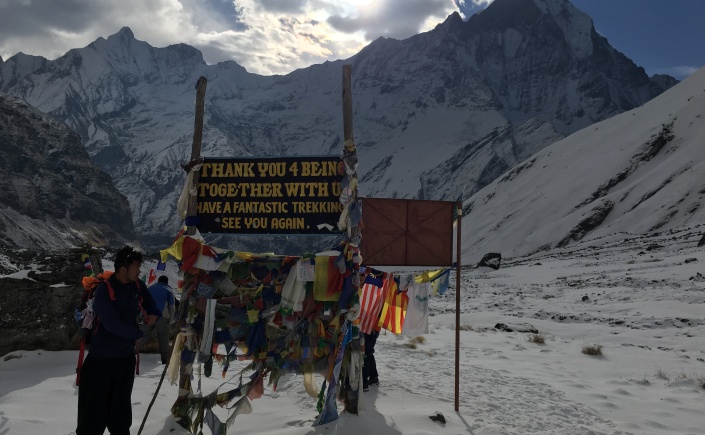 As I predicted, breakfast and departure from Annapurna Base Camp was a quick affair. Our objective accomplished, everyone had caught the scent of civilization. We’d get down about twice as fast as we had gotten up — we’d be back to Pokhara in three days.

The sign leaving Base Camp read “THANK YOU 4 BEING TOGETHER WITH US. HAVE A FANTASTIC TREKKING. SEE YOU AGAIN.”

It was one of the greatest signs I’d ever seen in my life.

Thank you for being together with us.

You could not sum up the experience of trekking in a better way. I’d struggled into Nepal alone, with Hollywood images in my head of being a lonely wanderer in epic mountain valleys. In 2016, of course, that wasn’t the reality of Nepal. Tourism is Nepal’s second-biggest sector, and trekking is probably the largest sub-sector of that. I had not been alone on my journey.

Thank you for being together with us.

I snapped a pic of Anker next to the sign, then roped Saffron in to pose for a group shot.

Young Ankit, the porter, took our photo. “Don’t say goodbye yet Dan,” he said. “Two more days.,” he said, holding up two fingers in a peace sign. “We will dance, at Jihnudanda!”

I smiled, even though I had no intention of dancing. The kid’s energy was infectious and I didn’t mind putting off our goodbye.

As I suspected, our journey down rushed by in a blur. The scenery was just as good, if not better in reverse, but after a week or more on the trail, everyone’s minds were focused on the finish line. Everyone put on a strong pace, even the diplomat, who had been so slow on the way up. Still, even with their new motivation, I was faster than most. I passed person after person on the downhill, stepping around them or nodding my thanks as they stepped aside for me. I winked at young Ankit as I passed him.

He caught my eye, gave me half a look, and picked up his pace. A few switchbacks later, he reappeared, trotting along at a fair clip. He passed me with a pat on the back. Feeling playful, I started jumping down the trail, taking great big steps from rock to rock. If you’re sure-footed, this can be a great way to descend a trail quickly.

I thought of my buddy Austin back home as I increased my pace. Austin, a year or two  younger than me and somewhat riddled with ADD, positively runs down mountains. Confident in his ability and lacking in the patience to slowly and safely pick his way through talus fields, the kid charges down at what must be ten or fifteen miles an hour. Every time I see him do it, I’m terrified he’s gonna break an ankle. He hasn’t yet.

I felt like Austin today, as I hopped rock to rock and passed Ankit again. He looked a little surprised, but I didn’t have time to stop. I just kept going, roaring downhill with a big smile on my face.

The path forked, and suddenly I saw Ankit as a blur of color through the trees to my right, blasting right along with me. We were in a full-on sprint, racing for the sheer joy of it.

Our paths re-connected after about twenty meters or so. I popped out in front and fist-pumped. I kept up the pace through a few more switchbacks before putting on the brakes. I slowed to a walking pace, then popped a squat on a large boulder beside the trail. Ankit came blazing around the corner a few seconds later. I offered him a lazy high-five, which he took as he slowed down.

We sat there, smiling, sweating, waiting for the rest of our friends.