I was trying to come up with a list of my “Least Favorite Countries,” recently, as a bit of a contrast to my Three Favorite Countries article. It was a pleasant surprise to find out that I couldn’t honestly come up with three countries I thought belonged on that list. Every place I’ve been to has held good memories or lessons for me.

There are only two places I would say I didn’t like that much. One was Sofia, Bulgaria, where I only spent a few hours, and the other was this surprising European country — which didn’t quite meet my expectations.

Hit the jump to find out where it was!

That country was Croatia

When I went to Eastern Europe in October 2016, my plan was to visit Shawn in Budapest, then head south down the Croatian coast to Greece, where I’d go climbing on the Greek island of Kalymnos. Like most travel plans, this one didn’t survive contact with the enemy.

At a hostel in Hungary, I met Oliver, a young Brit who had similar plans of heading south to Greece. We agreed to travel together. I bought us two train tickets to Zagreb. We agreed to meet at the station — but when I showed up, Ollie was nowhere to be found. I hopped the train alone. The journey was long and anxious — made more difficult when it turned out Norwegian customs hadn’t properly stamped me into the Schengen Zone.

But, I made it, and the next day, Ollie turned up too. We took in the sights in Zagreb:

We caught some wonderful street poetry on risque, taboo subjects 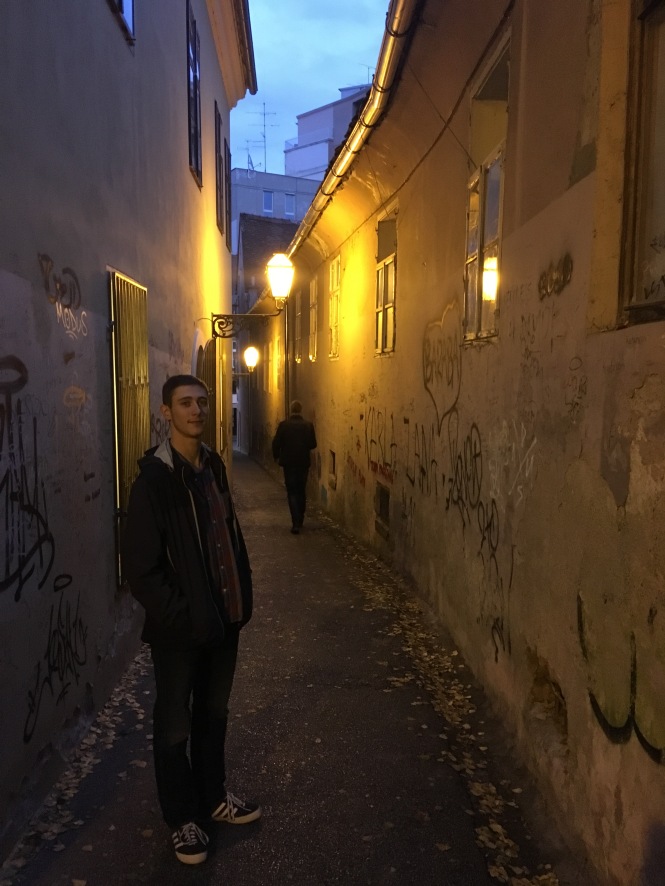 Took in this scenic gallery of local street artists

If you’re seeing a pattern here, it’s because Zagreb is COVERED in graffiti

After spending three days in Zagreb (including a day trip to the excellent Plitvice Lakes National Park), we were out of things to do. Zagreb was both too boring and too expensive for our tastes, so my traveling companion and I departed the country. Instead of moving down the picturesque Croatian coast, we hopped a rickety old German train to Belgrade, Serbia.

Belgrade was biting cold, dirty, and filled with refugees. 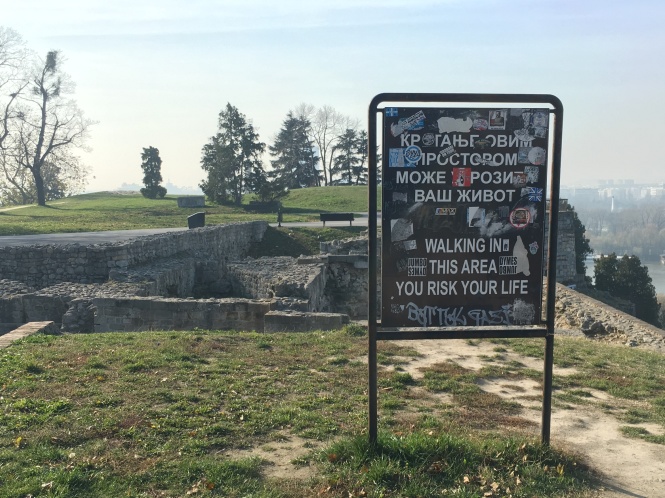 But, for better or worse, it was more interesting than Zagreb.

From Belgrade we went to Bosnia—stopping in the towns of Sarajevo and Mostar. Sarajevo stole my heart. I learned the real meaning of ‘fake news’ in Mostar. And all across this region, we saw the political cracks of a long-simmering hatred beginning to show.

From Mostar, we went back into Croatia, so I could visit Dubrovnik. 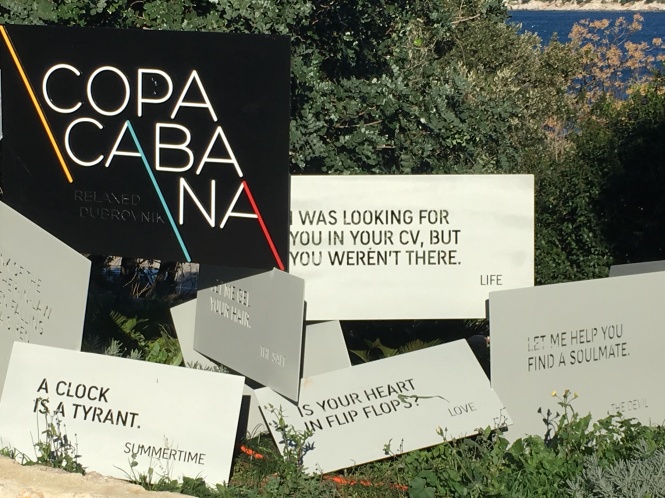 Dubrovnik seems like it checks all the right boxes. Look at this great public art installation, right? But the vibe just isn’t there. It seems inauthentic.

Dubrovnik, these days, is famous as the filming location for King’s Landing in Game of Thrones. (Did you see that Season 7 trailer?!)

We were out-of-season in Dubrovnik, which meant that prices were lower, and the crowds were lesser. And guess what? Things were still astronomically expensive, and there were still tons of tourists! This made the experience of the ancient walled city somewhat less than ideal, for me.

Sure, when it gets out of its own way, Dubrovnik can still conjure up its signature Italian-influenced, Mediterranean charm. Wandering the upper alleys of the walled city revealed plenty of odd little nooks, and the rock-climber in me was tempted to try and scale the walls at several points (if only to avoid the astronomical 15 Euro entry fee!)

Despite all this though, Dubrovnik just didn’t seem that cool. There was a Christmas market in the old town, which was nice, but the whole place seemed entirely too touristy: too expensive, too aware of its own good luck, and too manufactured. For my money, the best thing to do in Dubrovnik isn’t even in Croatia: it’s nextdoor, in Montenegro. 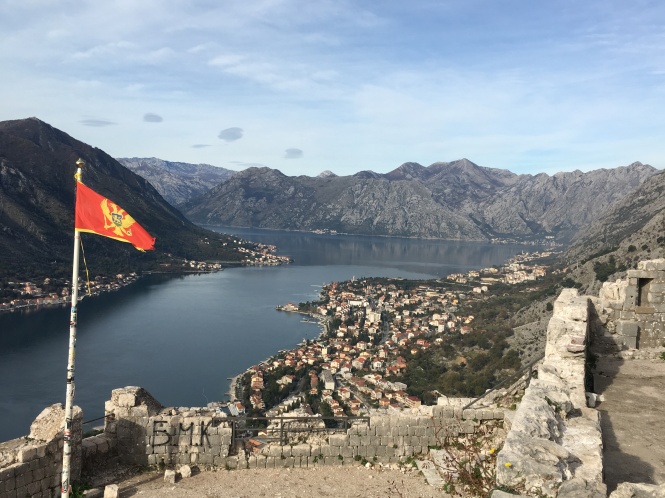 Kotor has all the charms of Dubrovnik: ancient walled city, centuries of history, charming little alleys and access to the sea. The thing that makes Kotor so great is: it has all those things, with none of the tourists!

Bonus: KOTOR is only like a 2-hour bus ride from Dubrovnik. Súper close.

Granted, Kotor is a increasingly trendy spot for both backpackers and cruisers — but even with its growing profile, the city is nothing like Dubrovnik. For instance: while it costs 15 Euros to walk the walls around Dubrovnik, you can hike the super-cool, crumbling old fortress above Kotor for free. There’s even a farmer’s cottage up there where you can buy fresh proscuitto and goat cheese. Ollie and I stopped in after a long hike, bought some ham, and ended up drinking rakija with the old farmer — who didn’t speak a lick of English.

Plus, the farmer had these sweet cats. He didn’t like em much — kept swatting at them with the broom — but they sure liked us.

We never came close to having an experience like that in Croatia.

That’s at the heart of my dislike for Croatia, I think. It’s a beautiful place, there’s no denying that. But ultimately, I made no stories there. Croatia felt like a vacation spot — not a traveler’s destination. I’d read so much gushing praise about Croatia on the Internet — ‘it’s so beautiful, it’s so cheap, the safety’s great!’ — that when I finally arrived, there was little was for the country to live up to the expectations.

When Ollie and I rolled into Albania, the hostel owner asked us where we’d been recently. Croatia and Bosnia, we said. But we liked Bosnia a lot more.

Bosnia has a bit more soul for travelers, I think, he responded. Albania, as it turned out, had a lot of soul too. I can’t wait to go back to Bosnia and Albania. Croatia though, I’ll probably skip. Especially if I’m paying.

On someone else’s dime, I would be more than willing to go back and give it a second try. (Hit me up, Croatian tourism board). But for now, I’m in agreement with the guy in Albania.

I didn’t find much soul in Croatia.

Do you agree with my assessment of Croatia? Or did you fall in love with the country? Do you have a similar story of a hyped-up place that disappointed you? I’d love to hear it in the comments!

12 thoughts on “Which Popular European Vacation Spot Disappointed Me?”