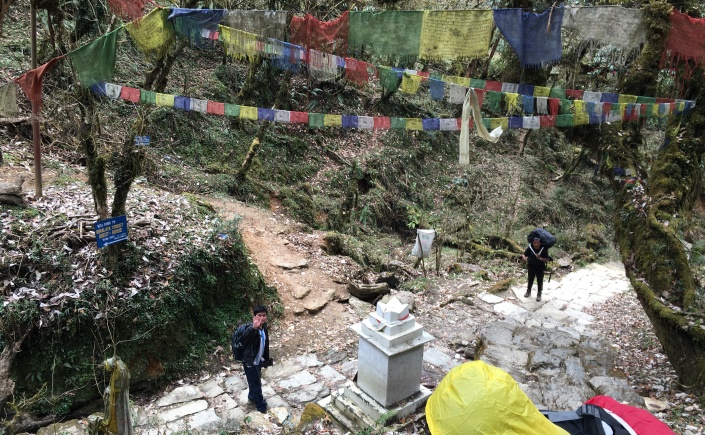 As it happened, the daylight never really came.

The morning was cloudy and subtle—no glorious beams of first light, no alpenglow or similar. Just a gradual lightening of the sky. Revelation is for the movies. That’s rarely how real life works.

Still, even on a cloudy day the Himalaya are a sight to be seen. Dhalaguiri was largely shrouded in clouds, but the Annapurna Massif revealed itself several times—although never long enough for me to snap a great picture. Hundreds of people swarmed the hill, taking selfies and shooting videos. It almost felt obscene.

Still, I took my photos.

When I grew bored with the crowds and the clouds, I returned to sit next to Sol. Her female guide was gone; a young Nepali man had taken her place. At first I assumed he was a guide, but we soon struck up a conversation and he revealed that he was just on vacation. He worked in an office, or something like that. Since trekking was so popular with foreign tourists, he’d decided to come see what all the fuss was about.

“In your country, you have a trekking and hiking culture, no?” he asked me.

I thought about my home state of Colorado, where everyone hikes, and said “In some parts, yeah.”

“You see, we do not have this culture in Nepal,” he said. “Trekking… hiking, it is not something people do.”

He nodded.”Yes. If there were not money to be made, Nepali would not do these things.”

That was kind of sad to think about. Holly, Sol, the clouds, and now this guy? This was turning out to be kind of a bummer morning. Well, my brain was going to some negative places, anyways. My glove-less hands, still jammed in my pockets, were freezing.

“Do you think it’s sad so many tourists come here?” I asked the Nepali.

He shook his head vigorous. “No, no, no. Tourism is good for Nepal. We like to share our beautiful country with you. Nepali people, you agree, are very happy, very welcoming?” He turned his statement into a question.

“Oh absolutely!” I said. “It’s been amazing to me how nice everyone is, even the people in the worst conditions.” I paused, thinking of all the people I’d met in Nepal so far. The kids from the Annapurna Guesthouse, who’d waited an hour in the rain to pick me up at the airport; the trekking agent, who wanted me on the trail to Everest ‘tomorrow’; Sujan, who spent his days cold-approaching tourists; the waiters at Thamel House, who had been willing to give me a free meal when I forgot my money; the man with no shoes; the cafe owner in Pokhara; Anker… the list stretched on. Almost every single Nepali I met re-affirmed my faith in humanity.

“And this hasn’t been the best year for your country, either, with the earthquake and the blockade,” I said.

My companion shook his head sadly. “No, very bad year for Nepal. But we always look on the bright side of things. Any little pleasure we can find, we focus on that. It is actually kind of a bad thing, sometimes,” he said. “We will be happy if you give us the smallest thing, like a pen. Because of this, we do not strive to improve.”

“This is why you have bad government?” I asked. How a universally-despised government remained in power was one of the main mysteries of Nepal, to me.

He laughed. “Yes, kind of. They give us pens with one hand, while with their other, they take millions of dollars for their own. Very bad people.We have very bad politicians, here, Nepal.”

“How many Senators your country have?” the man asked me. “Where are you from?”

“How many Senators for the whole USA?”

“100 senators,” I said, “but we also have the House of Representatives. Which is similar to Senators. That’s like… 400-something more.”

It was a simplification, but close enough. I agreed.

“In Nepal, he said, we have over 600 senators. And they are all out for themselves.”

“You see why it is an issue then,” he said. “Thy cannot get anything done. For instance: in 2008 our civil war ended.”

“The Maoists,” I say, hoping to cut off a long expository preamble.”

“Yes,” he said. “The Maoists. Very good. Since the end of the civil war, we have not had a new constitution. They could not agree on it. Finally, last year, after SEVEN YEARS, they agree. One week after they pass it, India begins the fuel blockade because they do not like the constitution we passed.” He shook his head. “So the people suffer, and the politicians do not care.”

“The blockade is lifting now though, right?” I ask.

“Yes, in the last month or so it is beginning to lift. But I cannot tell you the damage that was done.”

“Would you say the earthquake or the blockade was more damaging to Nepal?” I asked.

“The blockade, most absolutely. Of course,” he added. “The earthquake did not help. But we cannot rebuild from the quake without fuel. Especially in many villages, they cannot afford the cost of fuel.” He shook his head sadly.

I shrugged. “It is your country, brother, not mine. But I will be back as often as I can to support,” I said. I meant it, too. Sitting there, talking with this man of overcoming difficult situations and finding the good in the everyday, I knew I would be back to Nepal many times in my life. Although the conversation seemed a little pessimistic on the surface, it lifted my spirits. If the Nepali could smile through all of that, I knew I could smile through my troubles.

“We have a saying here,” the man told me. “You come to Nepal for this,” he gestured in front of us at the magnificent mountain range. “People come for the mountains. You come back for the people.”

“That’s a good saying, brother,” I told him. He smiled at me.

6 thoughts on “Nepal 74: The Ordinary Citizen”

Leave a Reply to Dr B Cancel reply

Emotions! While magazines and insta-sprayers will talk about the number or the grade of a climb like it is all-important, climbing is really about the feelings it creates in us. Without this joy, why waste our weekends doing something so useless as climbing a frozen wall of ice??
Almost.......
When it is cold... don’t complain... go ice climbing!!