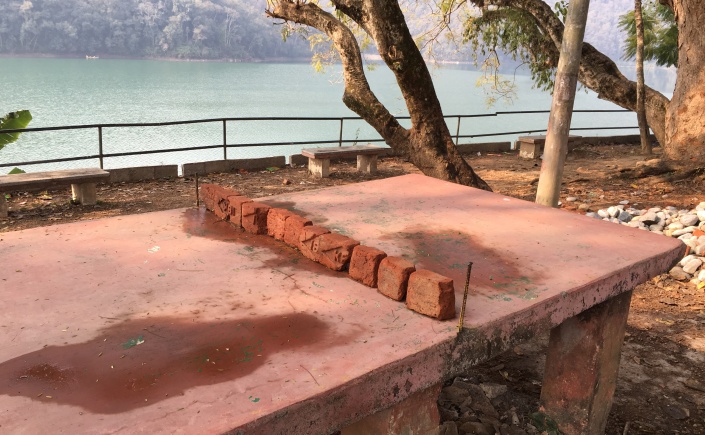 My encounter with the man down by the lake upset me so much, I just started walking up Lakeside with nothing in mind except putting as much distance as possible between me and him.

His harassment had made me so uncomfortable, and totally ruined my idea for the day. All I had wanted to do was sit on the side of the lake and read a book — was that too much to ask? Apparently.

That was my first negative interaction with a Nepali person so far, and it shook me up a little bit.

The intelligent part my brain – my IQ – knew I shouldn’t be as upset as I was. The guy was probably very poor, lived a very small life, and had no way of making money except by approaching tourists. Much like the homeless people my sister regularly worked with, he probably had to drink to numb himself to his situation.

Still, the emotional part of me – my EQ – was not satisfied with this explanation. After all, Sujan – my guide back in Kathmandu – and the old man with the bicycle here in Pokhara had been in the same exact situation, and neither of them has twisted my nipples. In fact, both of them had parted from me significantly richer than we’d met, exactly because they had been respectful and pleasant.

Oh well, I thought to myself. Bad apples everywhere.

I tried to shake the encounter out of my head as I continued  walking North through Lakeside. The neighborhood went on for longer than I thought. It seemed to stretch on and on forever. As I kept going North, the tackiness of the neighborhood dissipated a little bit. Although it was clearly still a tourist area, the concentration of trekking shops and agencies began decreasing ever so slightly. Things started looking dingier. I walked past a guesthouse, the “3 Sisters,” which advertised itself as a female-run business and guesthouse, a safe space for female travelers who wanted to employ female trekking guides. This seemed very progressive for Nepal, which as far as I had seen, tended to be a traditional, male-dominated society.

The neighborhood continued to lose its touristy flavor. The road quality deteriorated, the number of English-language signs started to drop off. Just as I was starting to contemplate turning around and heading back, a man stopped out of a nearby cafe, and hollered at me.

“Hey you!” I stopped and turned. An old man with a long white beard was standing in the entrance to the cafe, waving at me. “Do you like chess?!” The man yelled.

I swung a ninety-degree turn and walked up the steps to the tiny cafe.

I wasn’t sure what I had been looking for, wandering the streets of Pokhara. But I had developed a rule over the course of my travels: never say no to serendipity. When an old Malaysian man jumps out of a cafe and hollers at you to play chess, you take him up on his offer.

What’s the worst that can happen?

the picture doesn’t really have much relevance to the story this time, sorry. this makeshift ping-pong table was located near the lake. just illustrative of the poverty and creativity of these people. No net? no problem!