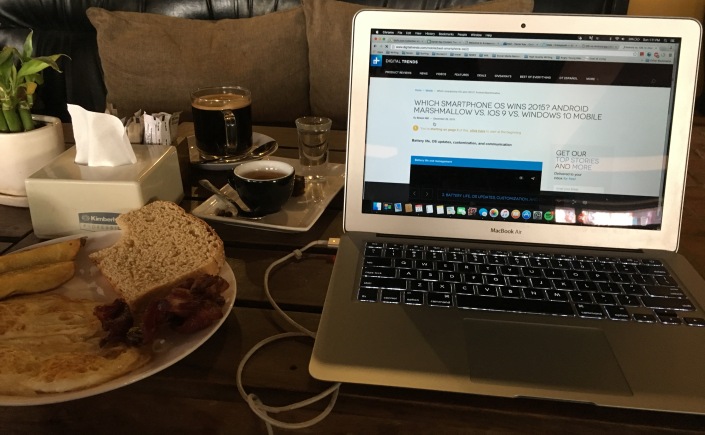 I carried Yanti with me as I walked the streets of Thamel.

I was still a little wary bringing a $1,000 computer onto the streets of Kathmandu, but I was slowly starting to feel comfortable in the chaos. As long as I carried the bag slung crosswise across my body so it couldn’t be snatched, I really faced no risk. Nothing could cut through the thick leather straps, if that was even a thing that happened here. Hell, I’d carried it on the much more dangerous streets of Kuala Lumpur, I could carry it on the streets of Kathmandu.

I was looking for a coffee shop.

Thamel lacked the hip coffee shops I liked. Many places served coffee, but they were restaurants, or plain white holes in the wall, not suitable for lounging on a computer. On one hand, it was kind of nice to find a place where Western culture hadn’t completely invaded. On the other hand, I really just wanted some coffee, some breakfast, and some time to figure out what exactly I was doing in Nepal.

My wanderings eventually led me to the outskirts of Thamel, where I found a string of brand-name outdoor retailers, and just beyond the North Face store, a coffee shop: Himalayan Java.

This was fantastic, as I still hadn’t figured out what, exactly, the Nepali ate for breakfast. I’d take tourist fare.

I walked up the stairs and hesitantly sat myself on the sunny balcony.

The place was bustling with white faces. I knew I should feel bad about this, but I honestly didn’t care. By this point, being an “authentic” traveler was the last thing on my mind.

My seat overlooked a busy street, and some sort of government compound. The flags of the South Asian Association for Regional Cooperation (SAARC) countries flew over the walled compound. I recognized the Islamic crescent of Pakistan, the colors of India, and the irregular shape of Nepal’s flag (only non-quadrilateral national flag in the world). The rest of the colorful banners signified nothing to me, except that I now was in a region about which I knew dangerously little.

A cheerful young Nepali server came and took my order. I got the breakfast, with an extra coffee on top of the one that came with the meal. I felt like the walking dead. Maybe coffee would help.

The power was out in the city at the moment, the waiter informed me apologetically. Load shedding. That meant no Internet at the cafe.

A young woman sitting next to me engaged me in conversation. She asked the usual traveler’s questions: Where are you from, how long have you been here, what have you done?

“I’ve just been here for a few days,” I said, coughing violently. “I’m a bit over Kathmandu.”

“Yeah, it’s gross here,” she said, knowingly. “Have you been to Pokhara yet?”

I shook my head.

“I highly encourage it,” she said. “The air is much cleaner, it’s more laid-back, there’s this really beautiful lake, and you can see the mountains.”

“Sounds really nice,” I said, truthfully. This town sounded more like what I had envisioned when I had decided I needed to go to Nepal, to clear my head.

“Do you want to go trekking?” she asked.

“Ah. Well Pokhara is the starting point for the Annapurna treks, if you change your mind. That’s where I just came from.”

“Incredible,” she said, her eyes lighting up.

She said goodbye and left shortly after.

Suddenly, American pop music began playing through the coffee shop, announcing the return of power to the block. I returned my attention to my laptop. In the half hour since I’d arrived, the sensitive piece of electronics had become visibly coated in dust. Maybe sitting outside wasn’t the greatest idea.

A monkey scampered across the power lines in front of me.

I started looking up information on trekking to Everest Base Camp. I could have gone to any number of trekking agencies within 200 feet of where I sat, but I simply didn’t have the energy to interact with people. So I sipped my coffee, sat in Nepal, and read endless forum threads and blog posts written by people who were trying to plan their own trips to the country.

When you start researching trekking in Nepal, you’ll immediately notice something odd. An inordinate amount of people were extremely impressed with their guides and guiding companies, to the point where any discussion about trekking is instantly inundated with recommendations for guides.

I was looking to trek independently, but almost every single forum thread, blog post, or trip advisor listing said “you have to use this guide!” “Don’t trek alone!” I am lifelong friends with this guy I met guiding!”

Some of this, I have no doubt, is true. But the majority of it is astroturfing: technologically literate Nepali guides trying to drum up business for themselves by posing as satisfied customers.

While I noticed the deception, the guides did have a point: trekking 21 days, alone, through the less-traveled Jiri route would get lonely. It could also be dangerous. Some of the villages between Jiri and Lukla (the normal starting point for the Everest Base Camp trek) had been damaged by the earthquake. The Internet seemed divided on whether they had been rebuilt or not.

My plan was seeming more and more insane.