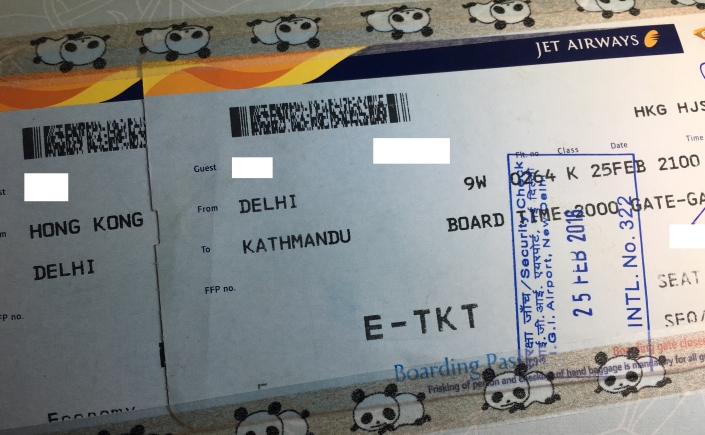 You don’t need to go through passport control when you just have a layover in a foreign country, so I never technically entered India.

After you’ve seen enough of them, all airports kind of start to look the same. Same bones: check-in, security, passport control/immigration, customs, a pickup area bustling with taxis and touts… by the time I showed up in India, after five months of travel, I was thoroughly unimpressed with airports.

.The one interesting thing about Delhi was the lack of gates. We actually disembarked by walking down a staircase, onto the runway. It was here, sweltering in the hot Indian sun, that I realized I had left the hat Holly made me on the plane.

Pure panic set in. People were still deplaning, there was no way I could go back in. I knew a bus would be by at any moment to take us to the terminal. I couldn’t get on without that hat. I’d left plenty of things on planes so far on my travels: sweatshirts, travel pillows, water bottles… I usually didn’t mind. But I needed this.

I grabbed a flight attendant and asked if they could check for a maroon, knit hat. After a few moments, a crew member walked down the stairs and handed it to me. I thanked him profusely. I immediately jammed it on my head, despite the 100 degree heat.

I haggardly waited through two security checks, and was sent back for extra screening, twice, because I’d failed to properly do… something. I was eventually waved through without extra scrutiny, because of my white skin.

After passing through the gaudy duty-free shops, I entered the Delhi airport and was greeted by a strange sight: live music. A string quartet of sorts was set up in the main foyer of the airport, plucking the exotic notes of the East.

Everywhere else I’d been in Asia, the pop culture was American. American movies, American music, and American celebrities are everywhere. The exotic music was an announcement to me: you are in a different world, it said.

I sat down and listened for a song. Another. And then one more. My heavy load sat at my feet; for a moment, I rested my shoulders and simply breathed in the music. It was sad and ethereal— at least, that’s how it sounded to me. Of course, with the memory of that hotel room in Hong Kong so fresh in my mind, “Happy Birthday” probably would have sounded like a funeral dirge.

I stood up and walked to the bathroom, which was covered in images of Indian celebrities and ads for Bollywood movies. No white skin to be seen here. Except for me.

I found my gate, all the way at the end of a far-flung hallway. It was an airport gate— there was little to distract me there, so I headed back to the main terminal, in search of a food court. It’s right around this time that I realized something horrible.

I had lost my boarding pass.

Numbly, I checked, double-checked, and triple-checked all of my pockets. I sat down and systematically searched my bags, checking the ticket pocket, the laptop pocket, and eventually, tearing apart the neatly packed clothes inside, to see if I had somehow wrapped it up in a pair of jeans and totally forgotten about doing it. (I hadn’t.)

I slumped sideways in my chair.

I was in a foreign airport, no visa, no girlfriend, a broken heart, and I’d just lost my boarding pass.