We were the only people wearing backpacks in the check-in line at the Marina Bay Sands, Singapore’s most famous 5-star hotel. All around us were businessmen in slick suits, Indian families on holiday and wealthy Korean socialites. Shiny, wheeled suitcases abounded, sliding silently across the perfectly polished floor of the Marina Bay Sands’ immaculate lobby.

And then there’s us: two very young Americans, soaked in sweat and baggy under the eyes, with these huge scruffy backpacks sticking up above our heads; looking up at the impossibly high lobby ceilings, with their suggestive curving lines and beautiful architecture. We were starstruck.

A five star hotel isn’t a traditional backpacker– or even flashpacker– destination. But this was the Marina Bay Sands— it is THE touristy thing to do in Singapore. It has the world’s highest rooftop infinity pool. The supertrees at the nearby Gardens By The Bay were one of the first things we agreed we wanted to see, a year ago when we first started discussing travel. And, it was Polly’s birthday.

So I booked a night in the cheapest room at the Marina Bay Sands.

The cheapest room at a five-star hotel is not cheap. In fact, I paid as much for one night at the Marina Bay Sands as it costs to rent a lower-end serviced apartment in Chiang Mai for a month. But sometimes in life, you have to go big. This was one of those times.

The benefit to looking out-of-place

After quickly reaching the front of the check-in queue, we were greeted by a very friendly clerk, who asked us if we were backpacking around Asia. “Traveling,” we said. “It’s my birthday,” Polly told him. “My great boyfriend over here bought us a night here as a birthday present.” “Good present!” he said, and upgraded us to a 51st-floor suite with a view of the bay.

Sometimes, looking out of place can make things happen for you.

Sometimes, it just makes you feel awkward as hell in Malaysia.

A suite at the Marina Bay Sands

Now in possession of a suite for the price of a simple deluxe room, we giddily headed to Tower 3, where we used our RFID room card to gain access to the upper floors (exclusiveeeee).

We were floored when we walked into the room. Coming from tiny backpacker rooms on Ko Lanta and Ao Nang, to THIS, was more than we could handle.

The suite consisted of a big lobby area with a couch, chairs, and big screen TV, and a wall of windows looking out into Singapore Harbor, where dozens of ships were docked. There was a small– very small– balcony you could walk out on. For a couple of landlocked kids like ourselves, this was an amazing sight.

The living room was separated from the bedroom by two large sliding doors. In the bedroom, the wall of windows continued. A plush, king-size bed commanded the room, facing a second, slightly smaller TV. All the lighting and drapes could be controlled from switches on either side of the bed.

In the bathroom: a huge bathtub, two sinks (godsend for couples), an opaque toilet cubicle (complete with a wall-mounted phone), and a rainfall shower. Toiletries and puffery out the ears, of course. There was also a huge walk-in closet and massive safe, but we honestly had no use for that. All our possessions fit on our backs.

The room was so cool it was tough to convince ourselves to leave it and actually go see the city. You could easily spend a week in Singapore without ever needing to leave the Marina Bay Sands complex— provided you had the money to burn. The area has a high-end Vegas vibe and is priced accordingly.

The Skypool at the Marina Bay Sands

We didn’t have a week, we only had one night; so we had to jam as much as we possibly could into that one night.

First stop: the famous Skypool on top of the building. Visitors willing to pay a small fee can access the restaurant, bar and observation deck on top of the Marina Bay Sands, but pool access is a privilege reserved exclusively for hotel guests. You can be damn sure we were going to take advantage of it, and get those Instagram photos.

To be honest, I never did nail “the shot” from the skypool. I got a lot of good ones, but no one definitive image. So I’m just going to post a gallery. 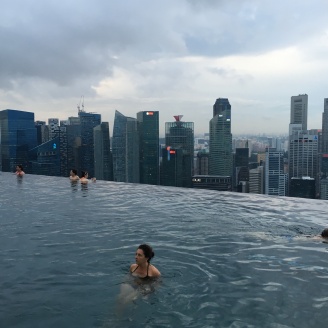 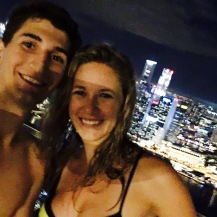 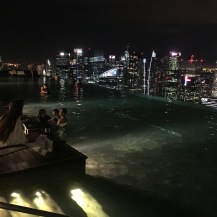 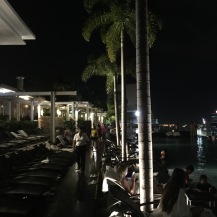 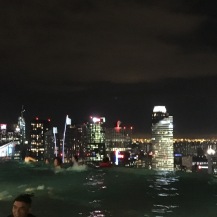 The pool area’s actually quite large, stretching on for 300 meters. It is pretty crowded, but we didn’t find it obnoxiously so. There were few enough people that your personal space could still exist, something which you can’t always take for granted in Asia. We were able to grab pool loungers or a spot in one of the three hot tubs without any trouble.

Unfortunately it was pretty chilly while we were there, so we didn’t spend too much time in the pool, which was apparently calibrated to help beat those sweaty tropical nights. We spent most of our time in the hot tubs, which don’t have such spectacular views.

At night, they put on a fireworks and laser show in the marina, which you can view from the infinity edge— an experience sure to make you feel like you’re “on top of the world!”

We lost some money in the casino. I tried to take a picture but got yelled at and then followed by a guy in a suit. As you can see, it wasn’t a very good picture. Not worth the yelling. Turns out I’m a bad gambler no matter which continent I’m on.

The Gardens By The Bay 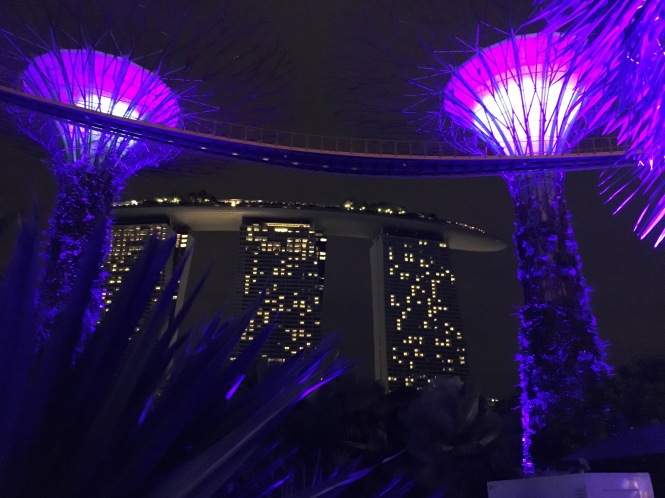 We went at 1 a.m. just to check out the Supertrees— this is a cool, free activity which is also open until late at night! Singapore’s reputation for extreme safety had us feeling fine strolling through the deserted Gardens in the middle of the night.

The Supertrees aren’t to be missed. They are huge, man-made megastructures, covered in lattices for vines and other tropical plants to grow on. Additionally, the trees are models of sustainable engineering. They have open funnel tops, which serve as water reclaimers: they capture rainfall, which is then recycled. The wonderful purple lighting comes from solar power collected by panels installed on the trees themselves.

The tallest supertrees are 50 meter (150 feet) tall. For a small fee, you can go up and walk between two of the tallest trees on a skywalk (we didn’t do this).

In addition to the supertrees, the Gardens By The Bay boasts an impressive collection of international flora. Sadly, we didn’t have much time to experience this, but those into plants and gardning would find a lot to like in this attraction.

Despite taking a significant chunk out of the budget for one night, I don’t regret staying a night at the Marina Bay Sands. Our free upgrade to a suite definitely colored my experience, but I think I would have been just as blown away by the simplest room this hotel offers. I can’t imagine anything here being bad.