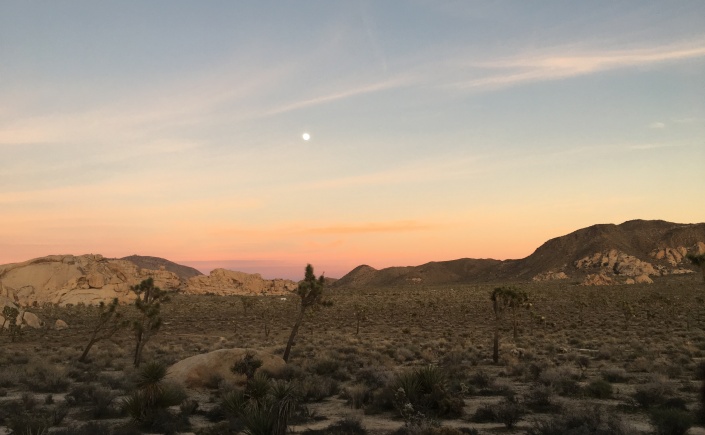 Joshua Tree was in the news a lot during December and early January, thanks to the US government shutdown. And if the Congress fails to reach a more permanent agreement by Feb 15, the government will shut down anew — and Joshua Tree may be in the news once again.

Why was Joshua Tree in the news?

A number of articles seemed to put forth the narrative that without US government workers to safeguard the land, irresponsible users were utterly consuming and destroying the park.

I’m an avid outdoorsperson and a huge advocate of Leave No Trace principles. I believe our public lands need to be protected and preserved for future generations.

But I’ve also spent the last few years working in online media, and have built a pretty healthy distrust for blindly accepting ‘reporting’. Here’s why:

So, I’m not saying it’s all “fake news”. But I am saying, you should measure what the news says up against independent observers and expert voices.

I’m no expert, but I was observing Joshua Tree during the shutdown.

And in my experience, people were being caring and respectful.

When were we there? 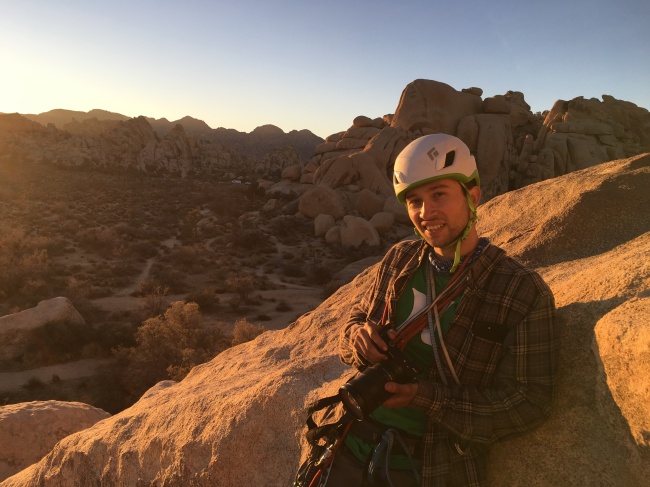 My climbing partnerr Jose and I arrived in Joshua Tree on January 4, 2018, and we left on January 21. For the first half of that stay, we camped on free BLM land outside the park. Camping inside the park was closed due to the shutdown, but the park was still open for day use. Midway through our stay, someone on high decided to suddenly re-open the park for camping, so we spent the remainder of our visit camped at Hidden Valley Campground, in the center of the park.

What does a “government shutdown” mean?

If you’re one of my international readers, you’ve probably heard about this situation, but may not fully understand it.

That’s alright: it is just as silly as it sounds.

When the politics are eventually sorted out, Congress passes a new budget for some short period of time. Federal workers get backpay, both sides blame the other, and then they play the game all over again in three months (or three weeks, in this case).

National Parks, a branch of the US government, usually close their gates.

During the last government shutdown, under President Barack Obama, a lot of people complained that the US National Parks were closed. So this time, under the Trump administration, certain national parks were urged to keep their gates open, even without staff to patrol them.

Since there was no budget to pay NPS workers, all the gate staff, park rangers, maintenance crews, and gift-shop employees were all put on unpaid furlough. NPS officials told the Washington Post that about 85% of their workers were furloughed after being classified as “non-essential”.

When my climbing partner and I arrived in Joshua Tree on January 5, the park was open for day use, but closed to camping. This meant someone opened the park gate at 6 am, and closed it sometime around 7 pm or so.

A single ranger drove through the park at sundown, warning people the park was closing.

The entry stations were unmanned, and the doors of the welcome center were locked. We stopped at the gate to see if there was a sign posted with information, or anything like that, but we found nothing.

Information was almost impossible to come by during the shutdown. 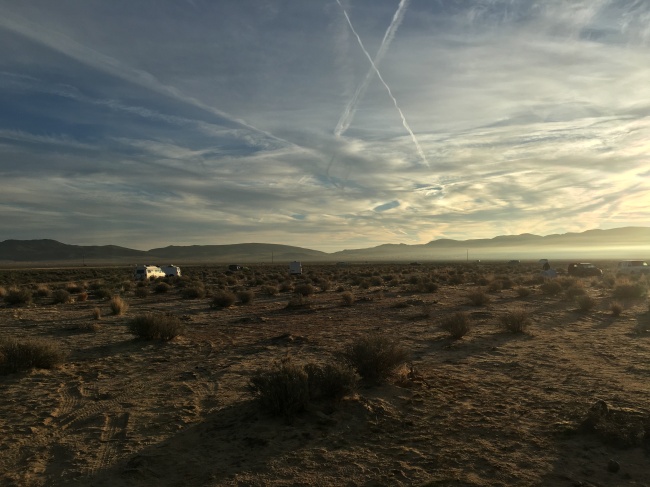 So we camped outside the park, on free public land (information on free camping near Joshua Tree, here), and drove in every day to rock climb. We left at sunset. We packed out all our trash and disposed of it ourselves, outside of the park. We expected the toilets to be locked; we had heard they were overflowing with human waste, and no one was cleaning it.

But, actually, once we started looking, we found: 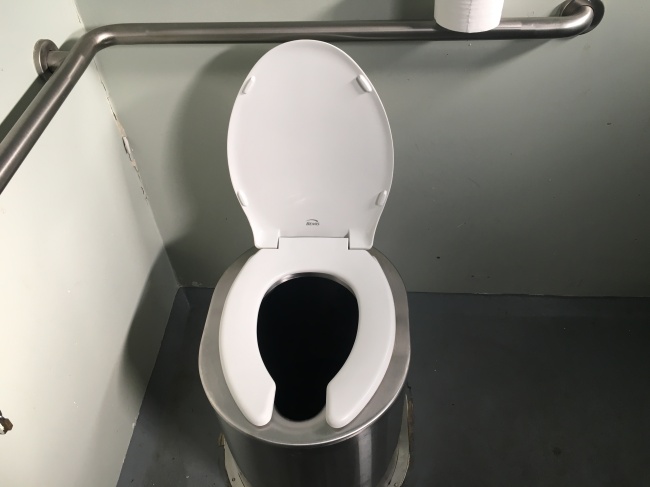 The biggest story out there was that the toilets in the park were “literally overflowing with human waste“. Maybe this was true during the early days, but by the time Jose and I arrived, the toilets were open, being emptied, and stocked with toilet paper.

Volunteers had been doing this work for a while, but as the shutdown dragged on, we saw NPS workers emptying the toilets every morning. The toilets in Joshua Tree were cleaner than many I have encountered at other NPS locations. 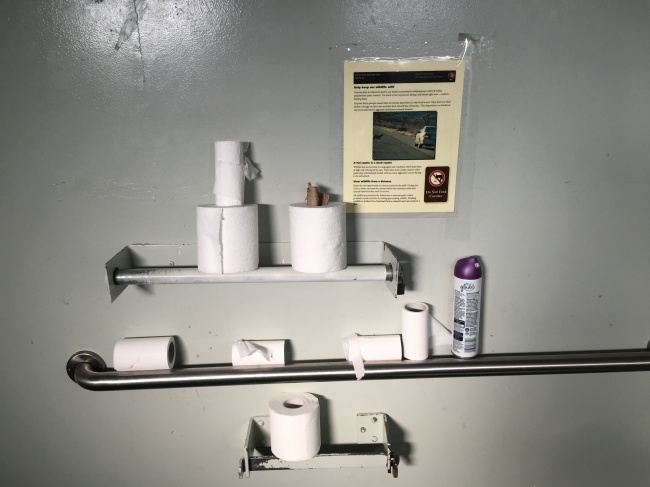 Even after moving to Hidden Valley Campground, Jose and I were collecting and packing out our trash, in an effort to reduce the load on the dumpsters inside the park. A (rather grumpy) park ranger came by one morning and told us to go dump it in the dumpsters. When I did take it, the dumpster was almost empty — no overflowing bins.

Everyone we talked to in the park was aware of the difficulties caused by the shutdown, and happily sharing beta on what the situation was, and how we could help the park staff. Granted, we had self-selected into a pretty specific group of users (climbers), and our experiences talking to these people are by no means representative of all user groups in Joshua Tree during this time.

Walking around Hidden Valley Campground, we saw some people who had left a handwritten note: “NPS, we would love to pay you for this campsite. How can we do it?” NPS employees had attached a response: “We cannot accept payment at this time”

I made a donation to Friends of Joshua Tree in lieu of the money we would have spent on entrance and camping fees. We encouraged other people who asked us where to pay to do the same. 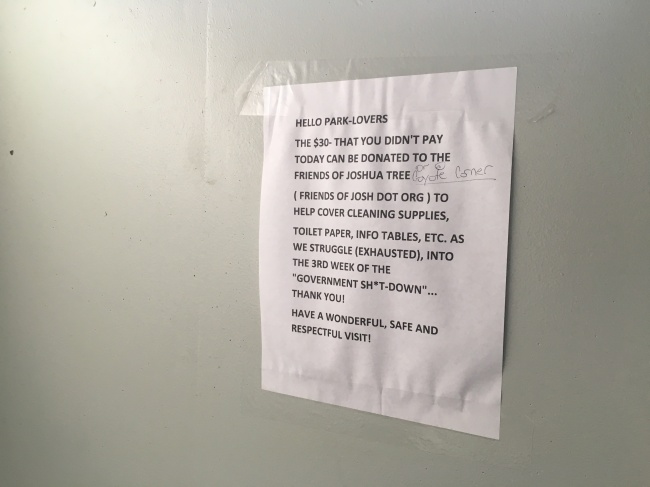 While the park was closed, volunteers from the local and climbing community stepped in the help keep the park clean, educate visitors, and protect the fragile desert environment.

When NPS wasn’t restocking TP in the bathrooms, volunteers stepped up. Gatherings of volunteers met in town and helped educate people about land misuse, emptied trash and restocked toilets, among other things.

A large part of the park’s clean appearance, I’m sure, we can attribute to hard work from volunteers. In the later stages of our stay, we started seeing a lot more NPS personnel.

When the park re-opened for camping, so did the visitors center, the front gate, and regular ranger patrols resumed. This was necessary to keep things from spiraling out of control, but I don’t think those people were getting paid.

This made them a little cranky, when we would sometimes interact. But the fact remains: these people were out there working, doing their best to preserve this special spot and keep visitors educated and informed about best practices.

This is one bad thing which we DID observe. The desert appears to be pretty, well… barren and lifeless, which can lead people to treat it with disrespect. In reality, there is A LOT of life that grows in the American deserts — but it’s fragile, and people walking on it or driving on it is extremely harmful.

This is one of the main reasons we need to educate visitors to the desert to stay on trails and roads. In such a seemingly wide-open environment, it can be tempting to strike off in whichever direction you please. This is a problem in Utah, and it’s a problem in Joshua Tree.

We saw a number of people parked on the side of the road, often crushing vegetation. We didn’t SEE anyone off-roading, but I do believe that some people took advantage of the lack of rangers to go and do it.

Still, this type of off-trail behavior occurs whether there are park staff or not — I’ve seen it plenty in Arches National Park and the Moab area, which is a simlarly fragile desert environment.

If you are unaware of Leave No Trace principles, I strongly encourage you to read this, and try and practice these behaviours yourself the next time you venture outside. 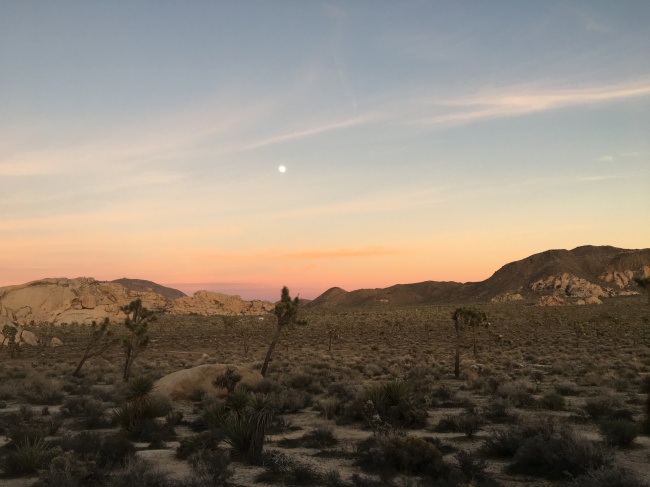 I’m sure plenty of people DID break the rules in Joshua Tree National Park during the US government shutdown. I’m not so naive to think everyone takes great care of their land.

But I was incredibly encouraged by the stewardship I observed from climbers and volunteers alike, who all seemed to be striving to keep the park as pristine as possible.

And no, I don’t think the park will need 200-300 years to recover. Not all scientists do, either.

I think the narrative of people coming together and respecting the land even in the absence of official oversight, is more worthwhile to be shared than the narrative which we DID see go viral — that Joshua Tree was overrun with jackals and villains and literal human garbage.

Yes, we can always do better.