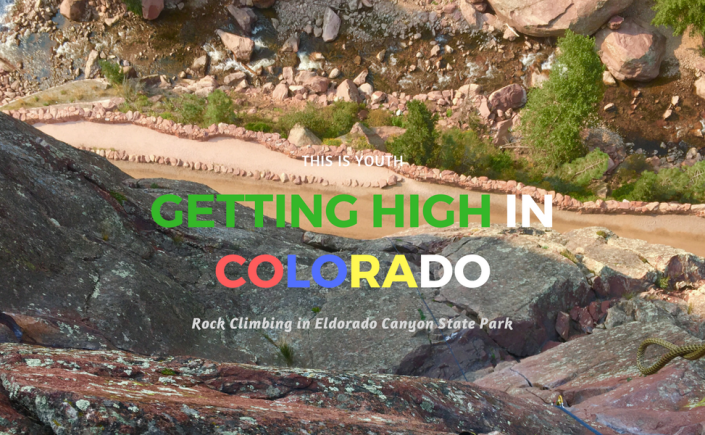 Eldorado Canyon State Park is one of Colorado’s premier climbing destinations. Nestled in a hidden little valley just a few minutes from the edge of Boulder, Colorado, Eldo is a spot most people will never have reason to visit. Unless you’re a rock climber.

If you’re a climber, Eldo is a Mecca.

I spend a lot of time on the road. This is, after all, a travel blog. But I can never spend all my time abroad — the pull of home is too strong. And climbing, for me, is a huge part of that pull. I don’t write about it much — but the fact is, climbing is just as exciting as anything I do abroad. (And I have not been that successful at climbing while on the road). So today, we’re going to take a look at one of the reasons I love my home so much, and why Colorado is a premier travel destination for many adventurers.

Why Do We Climb? 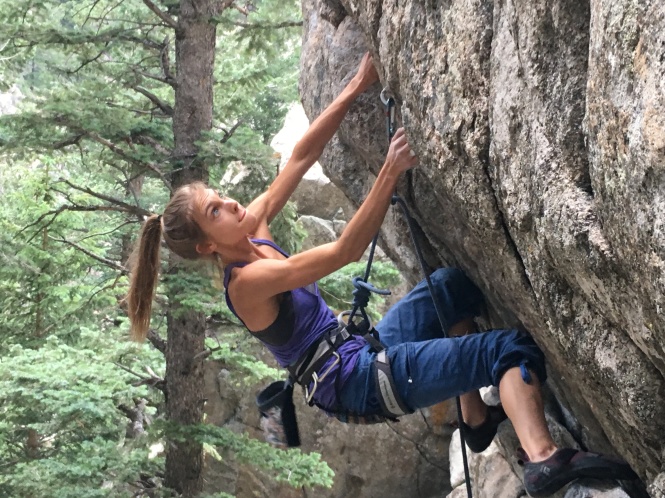 I haven’t always been a climber. Growing up I spent my time buried in books and behind the comforting distance of a console controller. But ever since I started climbing, I’ve found it’s something I can’t keep myself away from.

Other people often say similar things. “Why are we so obsessed with climbing?” asks a recent post on Mountain Project, a rock climbing website. It’s not the first time the question’s been asked, nor will it be the last. I get asked it often, usually from people who just don’t get it, and probably never will.

One person who does get it is Shawn, my old friend and first serious climbing partner. Shawn’s been living as an expat in Hungary for the past year, where he’s been constricted to climbing solely in the gym. So when he said he was visiting the states for a month, I knew I had to get him on the wall in Eldo.

Shawn and I have climbed a lot together, but mostly bouldering and single-pitch sport climbing. In other words, he’d never been too far off the ground. Eldo, known for its tall walls and old-school sensibilities, would be an all-new adventure for him.

A Day in the Park

Wind Tower is often described as a “choose your own adventure of easy climbing.” A great place to start our day and refresh on technical skills.

We started our day by meeting at 8 a.m. outside the entrance to Eldorado Canyon State Park. We met in a dirt lot off the highway, where we combined our two cars into one, and drove into Eldorado Canyon State Park. Since the park charges an $8 entrance fee, it’s best to rendezvous outside the park and carpool in. This also helps on crowded weekend days, when parking can be literally impossible to come by.

We were climbing on a weekday, but after a 10-day roadtrip across the U.S., our wallets needed every little bit of help we could give them.

We drove in, paid our fee, parked and geared up. From the parking lot, we walked maybe 100 yards to the base of the Wind Tower, a 300-foot pinnacle known for its easy climbing. 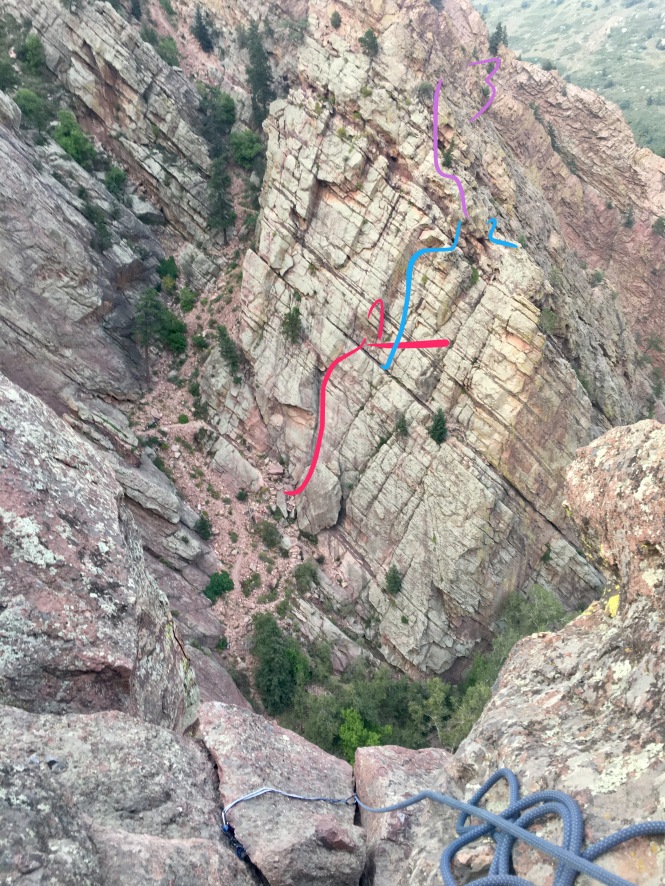 I’d chosen to climb Calypso first. Calypso is a popular, easy climb, one I’d done a few times prior. With a 5.6 rating (easy), I thought I could talk Shawn into leading it.

Leading, in climber speak, means to go first. The leader brings the rope up with them, placing and clipping the rope to technical gear as they go, to protect against falls. In “sport climbing,” the leader clips pre-placed bolts which are glued into the wall. In “traditional climbing,” which we were doing, the leader places removable gear in cracks, which the second climber recovers.

Trad climbing, as you can imagine, is quite a bit scarier, with a much higher risk and margin for human error. It calls for a clear head, which is not always easy to maintain when you’re 20 feet above your last piece of protective gear, starting to sweat and unsure if your placement will hold a fall. 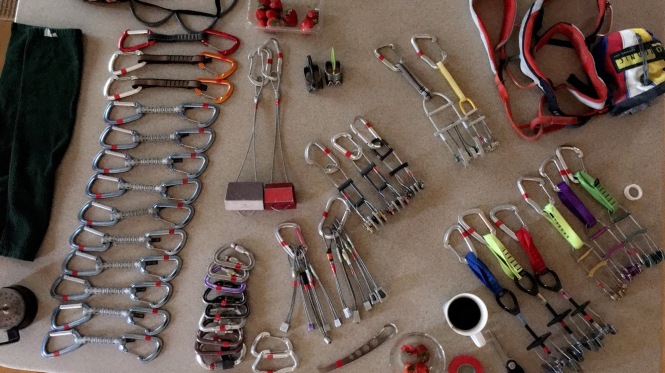 Despite being new to leading trad, Shawn cruised through the pitch. He clipped the two-bolt anchor at the top of the climb and belayed me up. We were sharing the belay with two US Army climbers, who happened to be training in Eldo that day. A bit of awkwardness ensued as the four of us tried to cross paths; our route continued right while theirs went left, and the ledge we were sharing was no more than two feet wide. Still, with a bit of creative problem solving, we untangled our ropes and everyone progressed with a smile. The Army guys continued on their climb of Recon (5.6), while we shifted our belay right and tackled our next section of climbing, a route called Reggae (5.8).

I led Reggae, which was a much harder route and required a building a gear anchor at top, a skill Shawn wasn’t too familiar with. The guidebook said we should have been able to “walk off” from the top of Reggae, but when I arrived at the end of the route, doing so seemed pretty dangerous. So when Shawn finally reached the belay, I suggested we just climb one more roped pitch to the summit of Wind Tower. I’d been climbing here before, and I knew there was an easy descent from the summit. 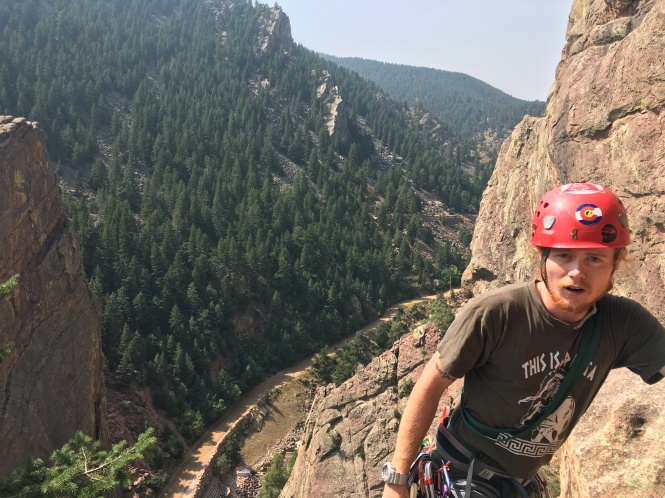 Halfway up a wall in Eldorado Canyon State Park

I knew the climbing from here up was easy, so I offered him the lead again. He accepted, hesitantly, and after a refresher on gear anchors, he set off. He climbed the pitch quickly, but took forever establishing the anchor. As a belayer, waiting for your leader to build an anchor is pretty boring — since you have literally nothing to do but stand there, usually out of earshot of your climber, and wait for them to pull the rope up. I amused myself by fiddling with a piece of fixed gear at the belay — a brown tricam which felt like it was welded into the rock.

Protective climbing gear is designed to be removable, but inexpertly placed, it can easily become difficult or impossible to remove. Fixed gear like this is a staple of climbing in Eldo — usually you’ll find at least one or two permanent pieces on a route.

This sucks for the owners, because that shit is expensive. (Cams, one of the most helpful pieces, run from $50 to $100 a pop. Trad climbers often carry 10+ of these.)

A popular game for climbers is to try and extract fixed gear. If you can rescue the piece, it’s yours. Climbers call this found gear “booty.” Bootying a piece (especially one which has probably been there a while) is a satisfying feeling. It’s like a puzzle which gives you a tangible, valuable prize if you can beat it.

So I was happy to have a piece to work on as Shawn fiddled with the anchor. In the end, after thirty minutes or so of sawing away sandstone with my nut tool, I freed the tricam at the exact minute Shawn started hauling up the rope. I was exuberant as I arrived, waving my new gear in his face. He was just happy that his anchor had held, and we both walked off the wall in one piece. 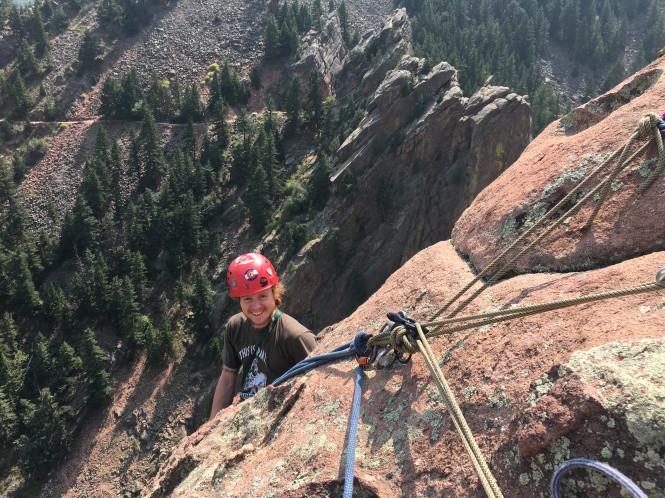 All smiles on top of Wind Tower

We went back to the car and grabbed our lunches.

All morning, we’d been watching parties across the road climb the Bastille Crack. The Bastille Crack is a very popular route on the Bastille Rock formation (the Bastille is the large rock behind Shawn in the photo above). There’s almost always a line to climb it — it’s probably the most famous climb in Colorado.

Mountain Project rates it as one of the 20 best classics in the COUNTRY.

“I’ll admit man, that thing looks a little intimidating,” Shawn had said earlier, on the belay ledge atop Reggae. “Just 350 feet, straight up.”

It was midday, and the canyon was starting to heat up. We ate our sandwiches in the shade at the base of the Bastille, and watched a party of three slowly struggle their way up the route.

After being assured there was a bolted anchor at the top of the first pitch, Shawn agreed to take the lead. He climbed it boldly, attacking it quickly, never pausing long enough to consider the difficulty. I followed. When I reached the belay, he said: “that was fucking scary man, I think you’re gonna have to lead the rest of this.”

I laughed, and racked up for the next 200 feet of climbing. My climbing rope’s 70 meters — about 210 feet — and I used all most all of it on the next section of climb. It was a a wonderful, sustained journey that had me smiling and whooping on the side of the wall. The sun was setting in the canyon, and I even stopped halfway through the climbing to free my phone and take some pictures.

As expected from pictures taken while trying not to fall or drop your phone off a big-ass cliff, they turned out great. 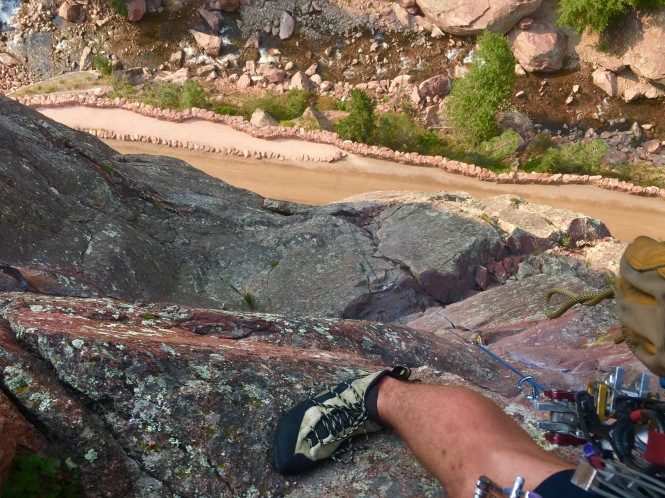 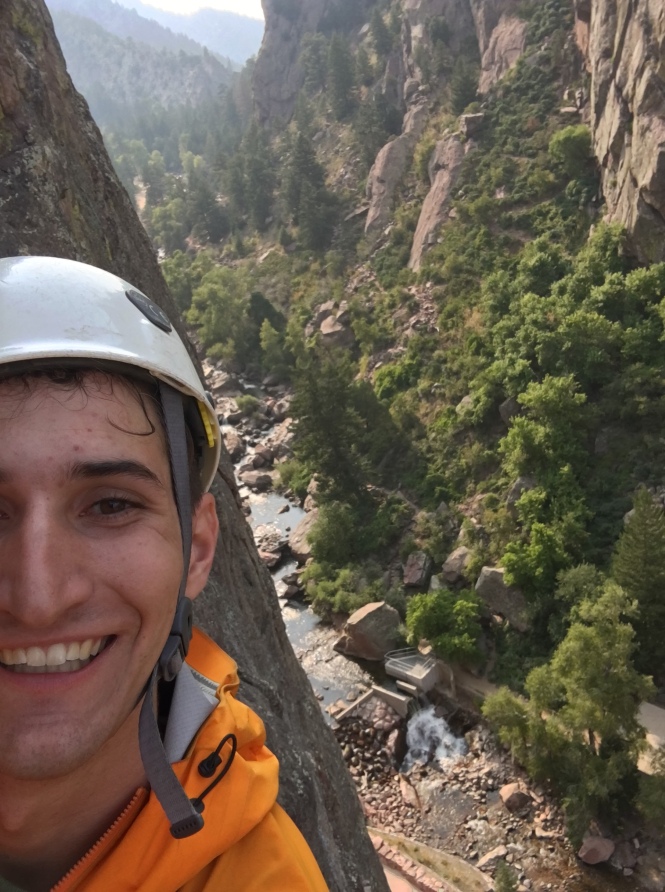 I hoped Shawn, down at the belay, was appreciating the view.

When he finally caught up with me, he said he had been getting a little nauseous from the height.  “This is some different shit, man.”

But yeah, he said, he’d been enjoying the view. 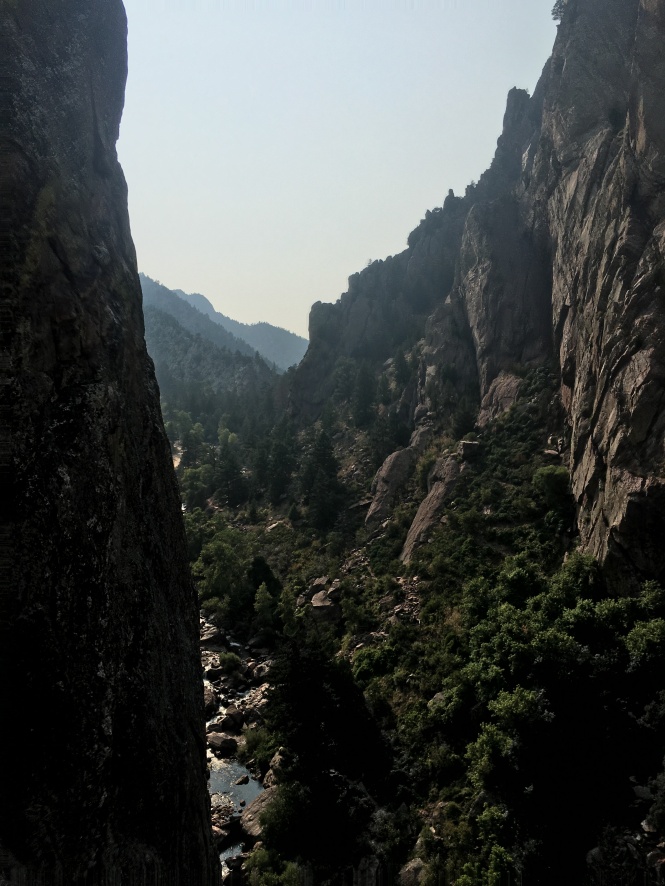 I climbed the last section in another long pitch. The party in front of us was occupying the easy chimney finish, so I headed right and took a devious 5.8+ finger crack variation — a scary finish for me. I almost fell on the final moves. I was sure the hard finish would have Shawn cursing me out when he caught up.

I reached the top and set a belay. I chatted with the party in front of us. They turned out to be Atlantans, visiting Colorado for an extended Labor Day vacation.

“We don’t have anything like this back home, so this is all new for us,” one said. “This is awesome, man.

“Yeah, we’re real lucky to be able to call this home,” I said.

The sun was setting, bathing the summit in a warm orange light. I felt very happy. 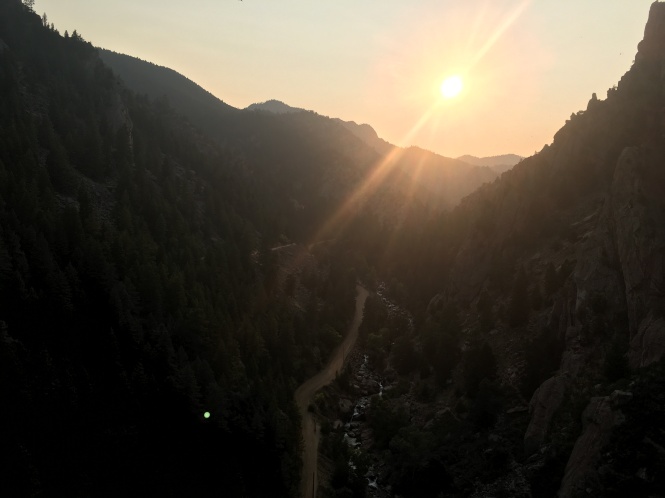 The Georgian climbers left, and Shawn soon summited. He wasn’t as mad about the finish as I thought he’d be. I guess he didn’t know how much easier the usual route was. Still, “That was definitely some of the craziest shit I’ve ever done in my life,” he said. 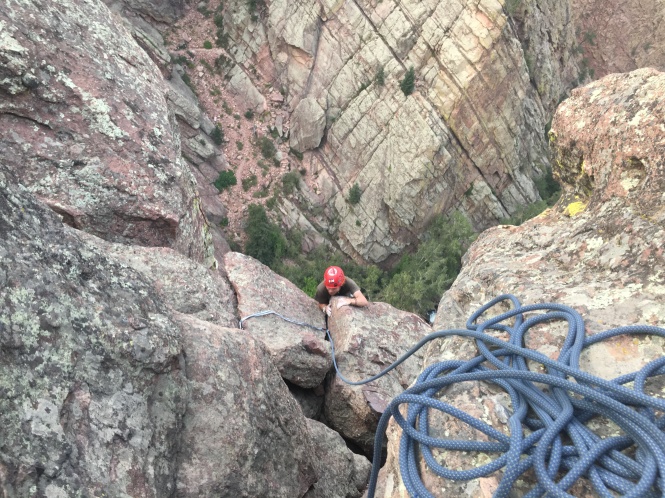 Shawn topping out on the Bastille Crack (5.8 variation finish)

We sat on the summit for a while, watching the sun set. We ate a Clif Bar apiece, drank what remained of our water, and took a few photos. Mostly though, we sat there, soaked it in, and enjoyed a sense of satisfaction. It wasn’t much in the grand scheme of things, but still — we’d accomplished something today. 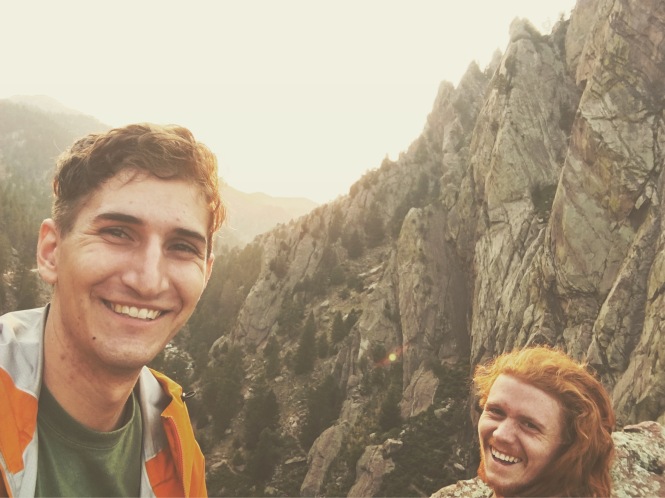 And ultimately, that’s why we climb.

Want to Know More About Climbing in Eldo?

This was a non-technical writeup of our day, more aimed at non-climbers than climbers. If you’re a climber, check out the Mountain Project entry for Eldorado Canyon.  The guidebook for the area is Steve Levin’s Eldorado Canyon: A Climbing Guide (2nd Edition). It’s 448 pages and lists over a thousand routes (this post describes three). I use the guidebook when climbing in Eldo. It’s great, although at 448 pages, a bit much to carry in your pack on some of the park’s longer approaches.

Best way to learn about Eldo? Show up, and take a look around! 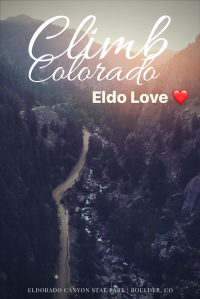 9 thoughts on “A Taste of Colorado: A Day Rock Climbing in Eldo”