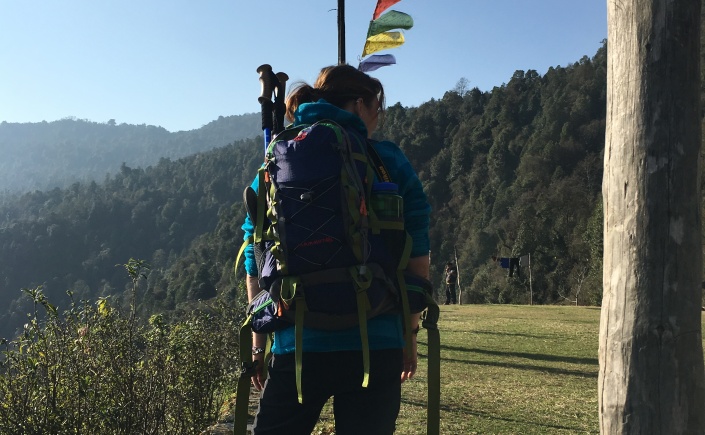 The diplomat’s daughter smiled at me a bit too long.

She was the only woman on this trek anywhere near my age — Sol and the rest of the masses had turned towards home after Poon Hill, while we worked over towards Suile, and the most beautiful moment of my life.

“Oh, you saw that?” the diplomat’s daughter asked me, as we discussed the rainbow in Suile. “I just stayed inside, it looked really cold outside.”

“I can tell, just from the way you talk about it,” she said.

I smiled. “Thanks.” In the corner of my vision, I caught her eyeing me.

I took it as a compliment, and hit the trail again.

The diplomat’s daughter spoke four languages, and was working on her fifth. I spoke only English, plus a smattering of long-forgotten high-school Spanish. I tried to speak in Spanish with her, but quickly abandoned the effort as entirely too embarrassing.

The diplomat’s daughter had spent her childhood traveling the world, living in different countries while her parents served on their diplomatic missions. I was envious of her life. She shrugged off my praise.

“It was okay. Better than growing up in America, I suppose.”

She was no big fan of my home — in my experience, most Germans usually aren’t. And with Trump on the horizon, she was extra disinclined to cut us some slack.

“I feel like the U.S. Is on the decline these days,” I told her. “Germany is growing. We are always hearing in the news about the strong German economy, and how important you are to the EU. You must have a nice quality of life there, right?”

“Eh, I don’t know,” she said. “Germans are pretty frugal. Maybe the numbers are good because we don’t spend much, you know? Germans save everything they make. We don’t live like, luxurious American lives.”

I laughed. “My life’s not that luxurious.”

“But that’s because you chose to do this work and travel thing,” she said. “That’s a really cool opportunity. I don’t think Germans would do something like that.”

“American innovation,” I said with a half-serious shrug.

She rolled her eyes at me and picked up her pace.

I readjusted my pack to sit higher up on my shoulders, and sped after her with a smile.

3 thoughts on “Nepal 88: The Diplomat’s Daughter”

Leave a Reply to The Overlord Bear Cancel reply