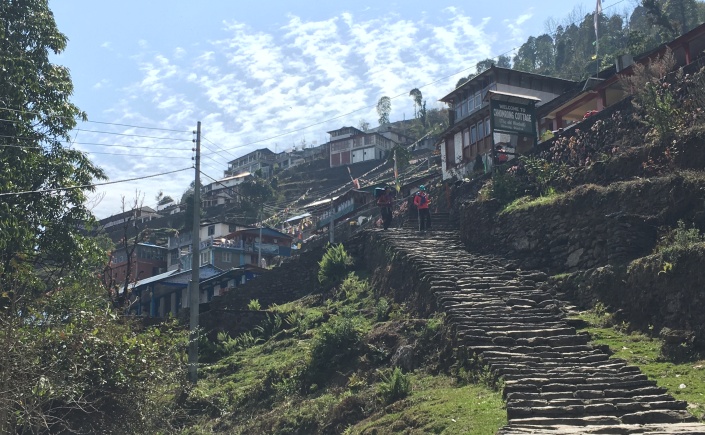 We stumbled into Chhomrong exhausted, with our thighs burning.

We had just descended what felt like a thousand steep steps. My knees were creaking; Saffron was leaning on my trekking poles while gasping; Anker was sweaty but whistling cheerily. “We stop here,” he said, as we walked into Chhomrong.

Chhomrong was the biggest village we’d encountered since we left Ghorepani. You could probably even go so far as to call Chhomrong a town—at least by mountain standards.

There were stores here, both for locals and for trekkers, and even a German bakery! After four days of eating mostly Dal Baht, some German pastries sounded pretty dang good—even though really, all I could think about was Taiwanese bakeries.

Although no one can from the West usually believes it, I’d say Taiwanese bakeries rival or even surpass French bakeries. For the last month before Hong Kong, Holly and I had been in Taipei, Taiwan, where we had eaten breakfast at one of the city’s innumerable bakeries, almost every single day. We’d eat our breakfast while wandering the streets, trying but not succeeding in working off all the weight we were putting on with our diet of pastries, dumplings, and simmering resentment.

I managed to keep myself out of the German bakery as we walked by, still descending yet more stone steps. I was daydreaming about Taipei as we reached the place we would finally stop for lunch: the Anna Aroma coffee shop.

A large sign sat out front of the coffee shop’s patio:

I took a picture next to the sign and posted it to Facebook. NCell got a little bit of coverage here, in Chhomrong. I could only guess the village was favorably positioned, or maybe it was large enough to justify a tower. It was nice to be able to update my friends on what I was doing, but I’ll be honest: it was kind of disappointing, too. Civilization pushed on, even here.

A fancy coffee shop in the Annapurna Sanctuary, I thought to myself. I was on Facebook. What a world.

We walked into the courtyard of the coffee shop, and unloaded our packs on a stone bench. I practically fell over backwards trying to remove my pack, so heavy did it feel. Saffron dropped his from about four feet off the ground, refusing to carry the thing for a second longer than he needed to. Anker cheerily removed his tiny daypack, and arranged his solar panels on the outside, so they could catch as much sun as possible.

Saffron and I collapsed into plastic chairs at an outdoor table. Anker disappeared somewhere, and was not seen again for some time. A kind old Nepali woman brought us menus.

Seeing pastries on the menu, I caved. I ordered a pastry and a fancy coffee.

The old lady went away and came back a minute later. “You want pastry, right? That one three days old,” the lady said. She shook her head. “No good. But maybe you want cinnamon roll? Only one day old!”

Taken off guard, I ended up accepting the day-old cinnamon roll, although I shouldn’t have. I guess the German bakery didn’t bake too often—or the places that bought their goods were loath to throw them out, even when stale. Where I grew up, we’d never had to eat stale bread. There was always more: more money, and more bakeries. Here, I realized, the proprietors may not have had access to either of those things.

We sat there in silence for quite a while: a comfortable quiet. It was warm with a light breeze; clouds slowly obscuring the peak of Annapurna South, which had been visible up the valley.

I sipped my cappuccino, looked at the “Likes” coming in on my Facebook picture, and shared casual conversation with Saffron. Much like our tranquil tea the day before, there was something immensely soothing about this moment. We spent an hour or two here, under the prayer flags, cooling down in the wind. A tremendous sense of peace settled over me.

As I sat under the Himalayan sun in Chhomrong, I couldn’t think of a more peaceful place in the whole world.

There was nowhere I’d rather be.

Emotions! While magazines and insta-sprayers will talk about the number or the grade of a climb like it is all-important, climbing is really about the feelings it creates in us. Without this joy, why waste our weekends doing something so useless as climbing a frozen wall of ice??
Almost.......
When it is cold... don’t complain... go ice climbing!!