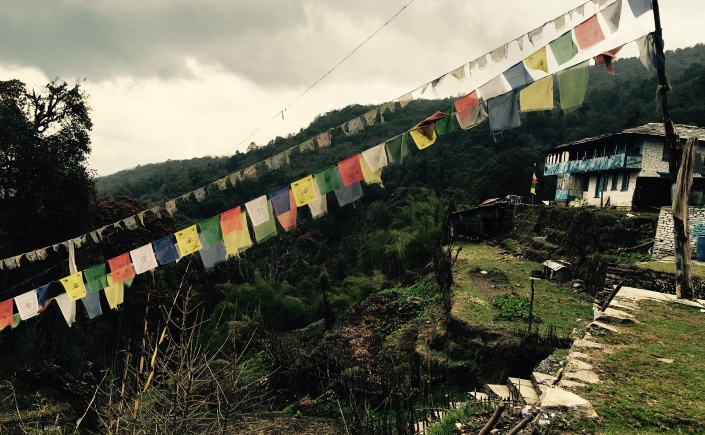 After a long afternoon of trekking, we finally reached our destination: the settlement of Suile.

To call Suile a “village” would be a little misleading, as it seemed to be no more than a number of farms perched on a hill, with, as far as I could tell, only a singular trekking lodge. Most people, Anker said, either stopped earlier in the day, or stretched on to the major village of Chhomrong.

After 11 hours of trekking, I was happy Anker wasn’t making us stretch on. If he’d told me stopping a few hours earlier was an option, I might have lost the will to keep on. The final steps into Suile had been pure torture. In the end though, I’m glad Anker hadn’t suggested either option, because Suile ended up being a place I will remember for the rest of my life.

The Mountain Discovery Lodge consisted of a two-story dormitory building which was painted a violent shade of pink. It had faded, sky-blue trim, and a rusty corrugated metal roof. A much smaller dining area/reception building stood next to the dormitory. The dining room was so small, it seemed impossible it could accommodate everyone if the lodge happened to be at full capacity. A huge, oval-shaped lawn lay in front of the structures. On one side of the lawn, a few five-meter wooden poles were staked down. Prayer flags were strung lengthwise along the poles, and between the tops; around the rest of the perimeter, on a more human scale, two-meter high poles had clothesline stretched between them.

A few Nepali kids were kicking a soccer ball around when we arrived at the teahouse. The field was large enough for a small game; no doubt a common occurrence. I shuddered at the thought of kicking a ball off the edge of the field though—there was no retaining wall, and the hill, terraced for agriculture, dropped swiftly. Those kids had chased many an errant balls down the mountainside into the fields, I was sure.

It was a beautiful spot. But after a grueling day trekking, I wasn’t in the best mood. I had spent much of the day locked in my own head, battling with inconclusive thoughts about moving abroad, and my relationship with Holly.

To use a quintessentially American metaphor, trekking is a lot like a roadtrip. You’re covering lots of ground, and you’re seeing interesting things, but for the most part, what you’re really doing is thinking. The two activities both provide the same thing: long stretches of time spent in your own head.

I had hoped this opportunity would give me the clarity to work through my issues, to find out what I really wanted. As the mythology of the journey went, an answer should be revealed to me. But here, on day 3, I hadn’t had any revelations. Hadn’t even come close. Despite the dramatic change of scenery, my mind found itself running in the same circles it always had. I found nothing new in Nepal that I hadn’t found in the ski town, in Thailand, or in Hong Kong.

I wasn’t surprised by this. I was more frustrated at myself. Frustrated at the fact that even though I knew I wasn’t getting what I wanted out of the relationship, I couldn’t get it off my mind. Things had been that way for a full year: disappointment after disappointment, gesture after gesture, and ultimately, failure after failure.

I could not separate myself from this woman, even though I knew I needed to.

The fact I had not been able to resolve this situation gnawed at me as we entered Suile, and I found myself in quite a dour mood.

The gray skies above me seemed to nod in quiet agreement. It began to rain; a damp chill pervaded the common room where I sat, silently brooding amidst the cheery conversation of others.