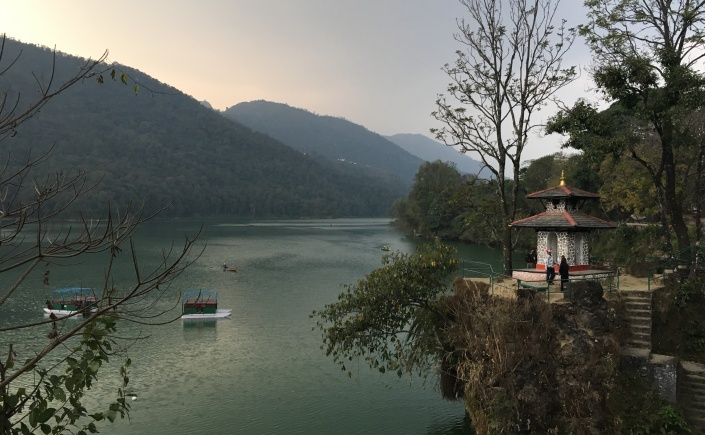 [this is an ongoing series about travel in Nepal. To get the full effect, I suggest you start at the beginning. But you do what feels right, friend.]

The Hotel Snow Leopard was located at the south end of Pokhara’s Lakeside district, a touristy area the Lonely Planet book described as “an extension of Kathmandu’s Thamel neighborhood.”

But when I ventured out of Hotel Snow Leopard that first night in Pokhara, I didn’t see many similarities to Thamel. The streets were wider, and emptier than in Thamel. No touts hassled me, and I wasn’t once offered drugs. The cool, crisp mountain air didn’t burn my throat upon swallowing. The full moon serenely lay on the surface of Fewa Lake, casting a calming blue-white light across everything.

It was a wonderful evening.

I wandered out of the muddy side alley one used to access Hotel Snow Leopard. The street this alley opened onto was paved, although not entirely consistently. I turned towards the lake, and started walking that direction, relishing the feeling of stretching my legs after spending all day on a cramped, bumpy bus.

I turned on to another, more major street, and then into the nearest restaurant I could find. It was a tourist trap, with high prices, huge portion sizes, and a decidedly western aesthetic. There were three or four separate seating areas, staggering from an outdoor patio to a raised stage in the back of the restaurant, where, presumably, they hosted live music.

Oddly though, there was no one else in the restaurant.

Three bored servers swarmed me as soon as I sat down. We chatted for a bit in perfect English, laughing at something or other. Already, the differences between Pokhara and Kathmandu were becoming striking.

I asked him where all the people were.

“Tourism has been bad since the earthquake and the blockade,” he said with a frown.  “People do not think it is safe. It’s about fifty percent of last year.”

“Yes, Nepal is struggling,” he said. “It is good you are here though, we need tourists.”

“It’s a little early for the tourist season, isn’t it?” I asked. “It should pick up soon?”

Fifty percent of usual levels… that explained why Pokhara seemed so empty, I thought. Pokhara had even been spared from the earthquake. But people in foreign countries weren’t likely to make those sorts of determinations. All they knew was Nepal wasn’t safe.

Nepal is safe, of course.

I ordered a huge dinner: chicken Biryani, rice, naan bread, and a pot of tea.

It started pouring rain as I sat and sipped my tea.

I looked out across the lake and thought about how I knew nothing.

I settled my bill and left the server a generous tip.

Broken hearted, running out of money, and wandering as I was, he needed it more.