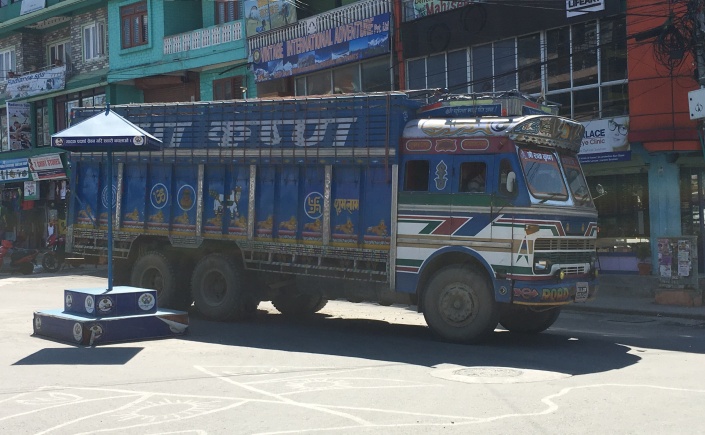 The bus from Kathmandu to Pokhara takes eight hours.

Why does it take eight hours to travel 120 miles?

That’s a simple answer: the roads in Nepal terrible, the drivers are worse, and the whole dance takes place smack in the middle of the most mountainous terrain that exists on planet Earth.

Watching out the window for all eight hours of the trip, I had a front-row ticket to his terror.

[this is an installment in an ongoing feature; if you enjoy it, I suggest starting from Chapter 1]

The bus route from Kathmandu to Pokhara crosses through the “middle hills,” a mildly mountainous section of Nepal which separates the lowlands of the country from the high mountains. Starting in bustling Kathmandu, the bus route ends in Pokhara, a somewhat more chilled-out tourist town nestled at the base of the Annapurna range.

For many travelers, this bus ride may be the only glimpse of real life in rural Nepal.

The difference between Kathmandu and the countryside couldn’t have been more startling.

Although great big tourist buses and even bigger mining trucks trundled along the roads, spewing black fumes and rattling along the uneven roads, the countryside between Kathmandu and Pokhara is largely undeveloped, agricultural land. Huge swaths of rice paddies are attended by one or two houses. Yaks, goats, and sheep roam the fields, sometimes minded by a person, sometimes not.

As our rickety bus traveled across the plains between Kathmandu and Pokhara, we occasionally passed through small towns. Once or twice, we even stopped to drop off passengers: usually locals, but one pair of brave tourists, too.

These towns consisted of no more than a few dwellings away from the road, the occasional guesthouse or hostel, and a few stalls selling prepackaged goods.

In Nepal, the “convenience store” doesn’t really exist. While a foreign visitor to Thailand might be shocked to see a 7/11 on every corner, a visitor to Nepal will immediately notice the complete and total lack of such places. Instead, Nepal has stalls. I say stalls even though these place do occupy storefronts. Most of them though, have no way inside. A customer just walks up off the street, looks at what is stocked behind the counter and in the display case – which usually sits flush with the street – and asks the attendant for what she wants.

These small, dark stores are ubiquitous — you will find several on any given block in the cities. They all sell roughly the same things: beer, snacks, candy bars, cigarettes, and cell-phone recharges. The indispensables — even in isolated, rural Nepal, people want alcohol, cigarettes, sugar, and cell phone data.

Those seem to be our universal vices.

A colorful building with four shuttered storefronts in Pokhara

The one unique thing you will notice, if you ever take a trip through rural Nepal, is the abundance of paint stores. These shops seem to be almost as common as the convenience stalls. At first, silently watching the countryside roll by, I couldn’t understand how the economy could support so many of these paint stores. How much paint can a town need, really?

Every bus and truck we passed was decorated, too. Some had religious iconography, others had murals, or clever sayings written on in English or Nepali. Some simply had zig-zags. But a plain white truck, so common in the U.S., was almost impossible to find.

How cool is that, right?!

I began to understand how the paint stores stayed in business.

Soon, the bus passed out of the plains and into more mountainous terrain — the middle hills.

Here is where things got both slower, and significantly scarier.

Mountain roads are winding and curvy.

Growing up in Colorado, near the Rocky Mountains, I learned that mountain roads need to be driven slowly, with care, caution, and respect.

This lesson isn’t taught it Nepal, it seems.

The route from Kathmandu to Pokhara is primarily traveled by tourist buses and mining trucks. Both of these vehicles are huge, lumbering beasts: extremely heavy, long, and difficult to maneuver.

The drivers of these death traps like to go fast and pass on sharp, blind corners.

Many, many times I was jolted from a waking daze by the musical sound of our driver laying on his horn, as a huge dump truck full of heavy rocks whipped around the corner, in our lane, headed straight for us.

Many of the bus horns play little songs, instead of just one note. It’s charming at first, but gets a little grating when your driver is on the horn once every few minutes. Horns are used more as a “hey, I’m here,” instead of solely as an angry outburst, the way they’re used in the U.S.

Of course, when a bus or truck rounded a corner in our lane, our driver would still slam down on the horn, and hold it down, until the crisis was averted. Riding in such conditions, one can easily see why Xanax becomes an informal mode of currency among backpackers traveling on long-distance buses.

Where the road from Kathmandu to Pokhara crosses the middle hills, the route has been cut out of the mountain. On one side of the road is a cliff; on the other? A sheer drop down a steep gully. In many places, the gully rolls downward for a kilometer or more, until it comes to rest in the river.

The river itself is impressive: snowmelt from the glaciers in the high Himalaya. The river carved the whole valley out, including the cliff on which the lives of our many terrified tourists are precariously balanced. Every now and then – and more often than one would like – a mangled truck or burnt-out bus is visible on the river-side of the road. Vehicles that lost control and went off the road. Too impractical to remove, the rusted corpses of these buses serve as a warning to the drivers still on the road.

Not that they seem to pay the gruesome wrecks much mind.

As we simultaneously whizzed by another bombed-out bus AND performed a dangerous pass while approaching a blind corner, I started wondering why I hadn’t bought any Xanax.

Well before Holly, I’d dated a woman with anxiety issues. It was astonishing the effect a pill like Xanax could have. From pants-on-head-panic to totally zonked took just one little pill, and about four minutes. With Xanax, nothing was bad; everything was beautiful, and we’d all be OK.

If I’d had a bottle of Xanax, I probably would have downed the whole thing.

No post on Friday, I don’t think. Consider this the end of PART 2. There’d be a nice beefy break here in a printed volume — an extra few days of spacing will have to suffice for those of you following along live.

30 thoughts on “Nepal 29: Bus From Kathmandu to Pokhara”