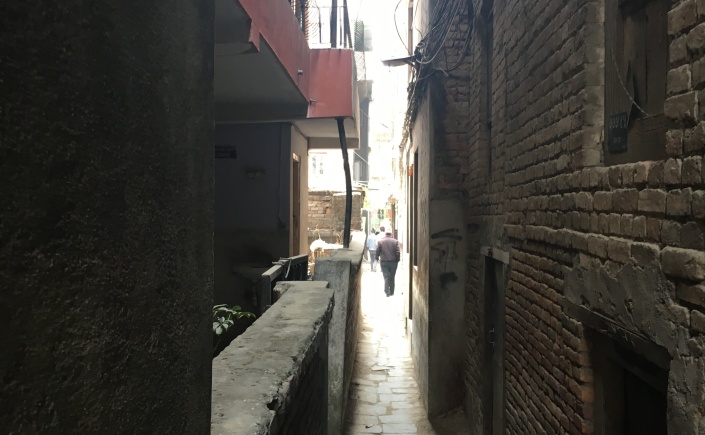 I tried to keep a mental bead on the direction of Thamel as I wandered, but the narrow, winding alleys of Kathmandu soon made this impossible.

Add in the fact that everything looks the same shade of dusty and run-down brown, a the total lack of street signs or even street names, and it’s easy to see how I quickly became hopelessly lost.

[this is a serial feature, I suggest starting from the beginning.]

I covered my face with the buff, and brought Holly’s hat lower on my brow, hoping to hide as much of my white skin as possible. I wore a long-sleeved brown cotton jacket, and brown pants. With a healthy coating of dust, I thought, I could almost pass for a local.

As I passed through crowded street after crowded street, I felt countless eyes on my back, and caught plenty of people staring at me straight on. I guess my blending in skills weren’t as polished as I hoped. My sunken white eyes jumped out at everyone on the street. 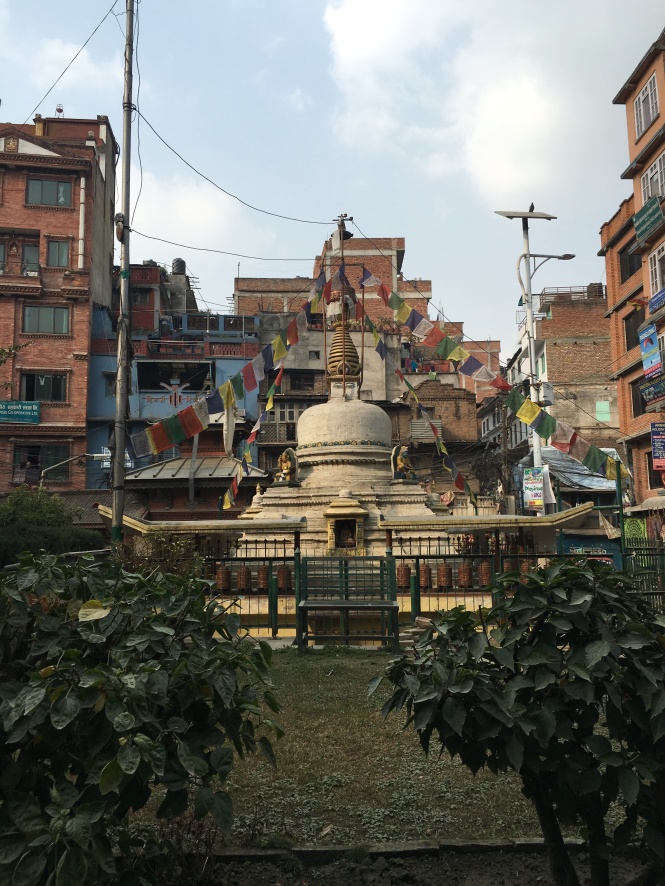 The magic of framing: this stupa sat in the middle of a crowded square.

I wandered past a stupa, a domed Buddhist monument. The spire atop the dome was connected to four strings of prayer flags, which ran down to the street, anchoring the four corners of the plot.

I shook my head regretfully, which was enough for most of them. One man kept pace with me though.

“Where are you going, my friend?”

“Are you lost? I can help you get where you want to go,” the man said, smiling.

It was a friendly offer, and I believed it was made in good faith. But the thing was, I wasn’t going anywhere. I didn’t want to admit that to this man though, so I simply shook my head.

I wove through a few tight gaps in the crowd, sped up, and hastened away from the stupa.

My path took me through a somewhat rundown section of the city. I was clearly off the tourist path, as the trekking shops and white faces had disappeared, replaced by more rubble and more ordinary clothes for sale. Jeans, sweaters, track jackets… these vendors sold to their fellow citizens, not to tourists.

You could tell. The streets were narrower, and sheathed in darkness because the buildings rose so high on both sides. Rubble and destroyed buildings were much more common here than in Thamel, and the prices – what I could see of them – were much lower. The incidence of English had also dropped off dramatically, I noticed.

That was one of the things I was most grateful for, I thought. It seemed everyone in Kathmandu spoke English, fluently. At least those in Thamel. Having come from Taipei and Hong Kong, where English fluency was much less guaranteed, it was nice to at least be able to communicate without resorting to wild gesturing, or smartphone translators. As nice as the Nepali people had been to me since I arrived, I was pretty sure holding a flagship-model iPhone out to try and translate could easily end with it getting snatched. And I’d have absolutely no chance of catching up with a thief in this cramped, byzantine city.

Suddenly, the streets widened onto a square of some sort. Five or seven alleys converged here, at this one point. A power pole stood in the middle of the square, leaning sideways under the weight of too many wires and transformer boxes. It was amazing that it was still standing.

At the bottom of the pole stood an army man, in full camo and holding an assault rifle. This wasn’t an impossible sight on the streets of Kathmandu – I’d seen a few already, patrolling Thamel or guarding banks – but it certainly wasn’t common. Especially in the areas I’d been walking through today. I looked around, and spotted a few more soldiers, looking a little too alert to be on simple guard duty.

That was when I noticed the crowd.

A street preacher had assembled a crowd of a couple hundred bystanders. He was yelling and gesticulating at the uniformed soldiers. The soldiers were alert, but didn’t have their weapons raised or anything like that. The man was preaching in his own language, so I couldn’t understand what he was saying. His tone, though, was readable in any language. He was angry, and he thought his audience should be too.

Armed soldiers, fiery foreign rhetoric, and a crowd of poor people who had been treated to nothing but ill fortune for the past year? I turned my white skin out of that square as quick as I could, and didn’t look back.

12 thoughts on “Nepal 21: The Alleys of Kathmandu”