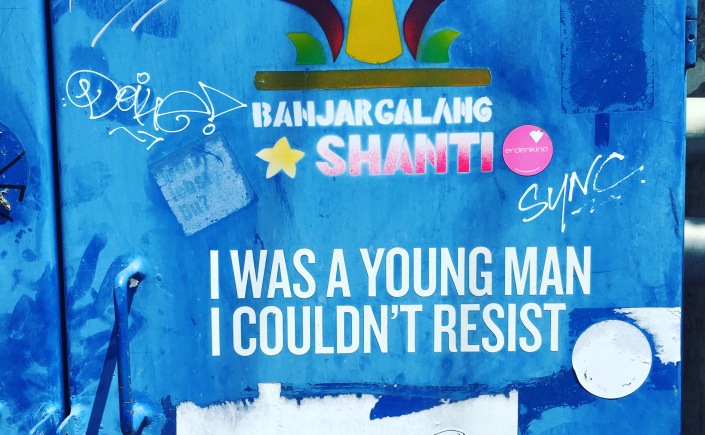 I put the not-down jacket back on the rack, and turned my attention to some other items I needed.

I got a 3/4 zip polyester shirt for $2, despite the fact the sleeves only went about 3/4 of the way up my arms.

The lady also sold me on some glove covers for $1, which I never even ended up using.

I bought a few pairs of trekking socks, and was negotiating for a pair of thermal long underwear, when something began to cry. I looked around the dim shop, alarmed. There was a child laying in the middle of the floor, on top of some cardboard. I was shocked, both by the condition this baby was in, and by the fact that I’d been in this store for about thirty minutes without once noticing there was a tiny human in there with us.

Such was the state of my mind, and my singular focus on trekking.

The woman didn’t stop negotiating as she went to tend to her child, but I did. I walked over and stared. The child was dirty and slack-jawed; a perfect image of third-world poverty. The mother said some words to her in a language I didn’t recognize, and the crying dried up. The child’s eyes flickered to me. I waved, and she waved back.

The child made a noise that stopped well short of “hello,” then turned away from me.

The shopkeep laughed, and turned back to the business at hand.

We reached a deal for the long underwear – another few dollars, probably – and I walked out of the store shortly after.

The bright sunshine hurt my eyes after too long in the dim shop. Part of the reason I’d failed to notice the child was the fact that the shop was lit by a single, bare, low-wattage bulb, hanging haphazardly from the ceiling. The bulb was suspended on a raw wire somewhere towards the back of the long, narrow shop.

I continued my shopping, walking into half a dozen similar shops, stacked floor-to-ceiling with cheap, low-quality trekking goods. Every shopkeep tried to sell me on these items at U.S. Prices, even as some of them literally unraveled in my hands. You don’t know hustle until you’ve tried to go shopping in Thamel.

It’s possible to get good deals, but you need to work a lot harder than you’d like at it. After visiting six shops, I was beyond exhausted. I’d only gotten about a third of the stuff I needed for trekking, but the idea of tangling with more shopkeepers was absolutely unbearable.

As dusk set, I beat my way back home through the brown streets of Thamel. The orange setting sun diffused through the dusty air, casting a hellish orange pallor over the scene. A more optimistic person might have said the scene was beautiful, otherworldly, or exotic, but I was quickly coming to despise Kathmandu.

My throat was irritated from breathing in dust all day, and I was beginning to develop a phlegmy cough.

Kathmandu had sunk its hooks into me.

I stopped at a small stall on my way back to the Annapurna Guesthouse and bought a tall can of Everest beer and two Snickers bars.

“Wait,” I told the man behind the counter. “One more Everest, and a pack of Marlboros.”

The last time I’d done so had been New Year’s Eve on Kuta Beach in Bali. I’d thrown up.

I returned to my room. The power was out again. This, I was learning, seemed to be a rather common state of affairs in Kathmandu. “Load shedding,” the manager had called it.

I shed my own load, dropping Yanti’s bag and my trekking purchases on the spare bed. I looked over the outdoors gear, disappointed. I’d spent most of the day shopping, and had barely a third of what I needed. I still didn’t have any boots, a pack, a good jacket, and tons of other equipment I considered essential.

I sighed and sat down at the smoking table. I cracked a beer and ate a Snickers.

I was still hungry, so I smoked a cigarette. It tasted horrible and made me feel vaguely ill.

I got up from the table and opened the window a little wider to let in some fresh air. I went and laid down on the spare bed, staring up at the ceiling. The buzz from the cigarettes felt a little bit like the spins you get from drinking too much. I watched the ceiling for a few minutes until I felt better.

I’ve got this theory that you can tell the story of a relationship in terms of ceilings.

I’ve never quite dialed it in: I’ve explained it to a few women, and drunkenly rambled about it more than once, but I’ve never truly been able to express it satisfactorily.

A lot of key moments in my life have happened laying on my back, staring at a ceiling. Sometimes I’m next to another person, sometimes – like tonight – I’m alone. The scenes tell a story all their own.

As I laid there, I remembered telling this theory to Holly. I remember I tried to write about it, although I don’t think I showed it to her. I never showed Holly my writing.

I’ve always been terrified of rejection.

I pulled out my computer, and searched back through my unorganized files. Bits of writing, incomplete school assignments, and old photographs charged with memory flew across my vision. Eventually, I found it. A few years old. A plain text file, under the title “ceilings.”

This is me and women my senior year of college.

There’s nothing in this world quite like falling in love, I tell this girl. We stare at my ceiling. We lay fully clothed, side by side on a twin bed. Old lovers lie between us. The embers of a vacant sun linger in the room.

I don’t think I could tell someone I love them, she says. Not until after a long time.

Some eight hours later, I’m naked, staring at her ceiling. She’s sitting at my feet, staring out the window at the rising sun when she says:

I don’t think I want to have sex again. At least not for a while.

I blink. Her roof is pretty unremarkable, but it seems to be all I can think about right then.

An empty expanse over your head. A quiet canvas to spill your soul into.

The next time is another girl. I like this one less. She can’t really kiss; she doesn’t talk much. But she does like For Emma, Forever Ago. It spins on the turntable. And for tonight, that’s been enough.

I pull away from her silent form and lay on my back. She stays spooning. I know she’s awake. I stare at my darkened ceiling, and wish I could be alone.

Too much emptiness starts feeling all the same.

This one has a boyfriend, but she follows to my room. Closes the door. Wants to spin the xx. “This is so cool,” she says, adjusting the pitch on the turntable. I lay on the bed, she sits at the foot. I position myself conspicuously to one side.

“Infinity” fills the empty space between us. We listen to the rain pour down outside. The moment lingers; lovely.

The building fire alarm sounds. My ceiling is leaking water, and I hate this place.

Don’t take this the wrong way, the next says, as I determinedly stare upwards, laying on her bed, looking for all the scene like I’m ignoring her. But you’re a bit of a lonely soul.

She presses close against me. Her fingers absently trace over the exposed no-mans-land between my too-small shirt and my belt, promising Disney love in a way that makes it easy to see why so many of my friends have been so fucked by her.  “And I think… other people see that, and others who are searching too are… drawn to it.”

She has the biggest ceiling I’ve seen in a while. It stretches out beyond the corners of my vision. I don’t know what I should be projecting onto this one. The ex-girlfriend of my best friend. Daddy issues. Happy smiling motherly-type. Terrifyingly fake; except in moments such as the present. I’ve known her three years. I’ve been graced with two, perhaps three glimpses of this girl without her mask.

Have I offended you terribly? she says.

She cries into my chest, pressing against me while I hold her. I don’t hear anything, but I can feel.

I watch TV with the next one. I sleep next to her. I don’t turn my eyes up. I forget the box we find ourselves in.

I don’t know if this is a good thing or a bad thing.

I laid back on the bed and sighed. The ceiling stared down at me, taunting.

I closed my eyes.

The essay, incomplete and grasping as it was, sparked some deep feelings within me. Laying there in the Annapurna Guesthouse, I saw faces flash behind my eyelids. Some, I had long since lost track of. Some were still old friends.

Laying there, all alone in Kathmandu, I saw their ceilings, too.

Physically, I shook the images out of my head, and rocked myself out of bed. I grabbed a jacket, the room key, and headed out for some dinner.

I didn’t want to think about ceilings any more.