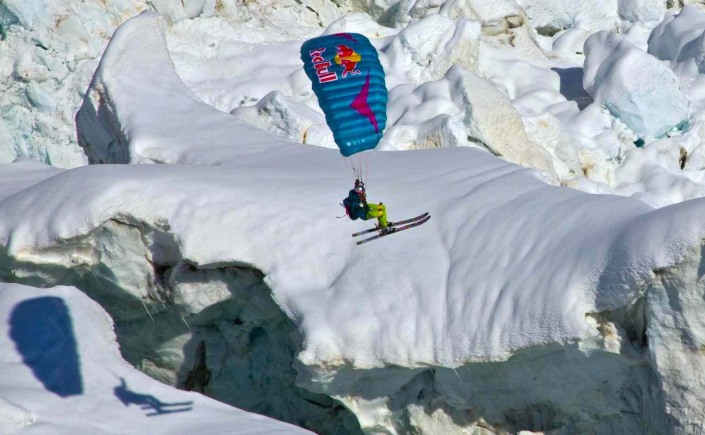 Our focus this weekend is on speed flying. Speed flying is a combination of skiing and paragliding, a combination which results in what is without a doubt some of the most stomach-clenching POV footage ever shot. Super cool stuff.

I first saw speed flying at the 2013 Warren Miller film No Turning Back. Unfortunately that particular segment doesn’t seem to be freely available online. If you have never been to one of Warren Miller’s ski films, I recommend the experience. At the time I saw Ticket to Ride, I was not even skiing or snowboarding very much, and it was still exhilarating. The cinematography is top-notch and they give away plenty of skis and gear at the showings. Warren Miller is a cool outfit.

And Warren Miller introduces you to cool stuff such as speed flying. Which brings us back to our ski video Sunday.

Our first video comes from 2006, before the advent of the GoPro. If you look closely, you can see that these guys have duct-taped cameras to their helmets. It is POV footage of the first speed flying descent of the Eiger.

Our second video is a more professional, controlled scene showing a team of speed fliers descending Mont–Blanc. The removed perspective gives you a sense of the beauty of this movement.

Hope you spent your weekend doing something life-affirming. I went to the X-Games. Those guys and gals don’t need the parachute to go flying. Post on it coming soon. Anyways. Have a good week, and