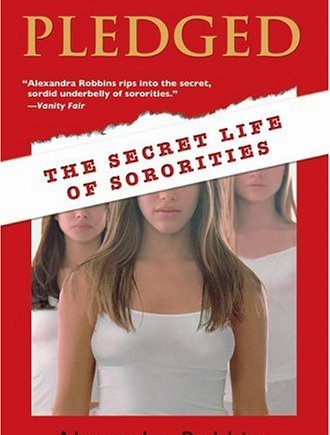 Here’s a fun fact about fraternities and sororities:

all of the stereotypes are true.

Here’s a fun fact about my life:

I founded a multicultural fraternity my freshman year of college.

Here’s how those two fun facts fit together:

although the stereotypes may be true, they don’t come close to giving you a complete picture of what Greek life is like for those who live it. And these stereotypes serve as a crutch for people who are not willing to understand the complex relationships which drive Greek organizations. This is the real issue I have with Alexandra Robbins’ “Pledged: The Secret Life of Sororities,” a decade-old expose of Greek Life which I just finished reading. It does not live up to the promise of the title. The book has no secrets to share. “Pledged: The Secret Life of Sororities” simply regurgitates the common cultural narrative, without trying to unpack why it is that narrative holds such pull. “Pledged” is cheap.

What is this book?

“Pledged” is an exhaustively researched inquisition into sorority culture in the Deep South, where the institution is especially powerful. At many Southern universities, well over 50 percent of the student body is enrolled in Greek Life; those who aren’t wearing letters across their chest are often actively ostracized. Southern sorority sisters are the most extreme subspecies of American Greek; one can’t fault Alexandra Robbins for choosing to focus her book around them. It’s compelling stuff.

There’s a reason that fraternities and sororities have entered the cultural consciousness. They’re interesting; in the abstract even if you’re not drawn to the idea of placing yourself among this community. They’re in movies and on TV. There’s a definite allure to watching Greeks: after all, there’s a certain voyeuristic appeal to watching someone else’s self destruction.

And self-destruction is how Alexandra Robbins chooses to cast Greek Life in “Pledged: The Secret Life of Sororities.” This is why I have an issue with Robbins’ book.

The paperback copy I read– waterlogged and stained with my (unaffiliated) girlfriend’s nail polish– begins with a preface that claims that the book is only facing criticism from Greeks that refuse to read it. The patent absurdity of this claim aside: I read the book. I read all 339 pages of it (I skipped the endnotes, because I had little reason to take umbrage at any of the factual information presented in the book).

I take issue at the information and perspective omitted from the book. Robbins shows us self-destruction, but she steadfastly refuses to consider the inevitable reforging that must occur in the aftermath of such a catastrophic eradication of the self. As a modern version of Robbins’ sorority caricatures might say: the book is basic.

Robbins’ book is scary. True to the cover, Robbins depicts the sorority system as an out-of-control perpetual-motion-machine, eradicating individuality, stamping women in a way more significant than giving them indecipherable letters across their chests. She does a good job at making the sorority system seem absolutely absurd. Which it is. But I’ll argue that a writer with Robbins’ pedigree (Upon finding her photograph and C.V. on the back cover, I was surprised to see she was a staff writer for The New Yorker) could make any element of collegiate education seem just as absurd by placing it under such a microscope. A university, for all its wonder, is an anachronism, with many jagged edges grinding against each other at all times, while students try and maneuver through the gaps.

I’m not alone in this line of thinking. In fact, this absurdity is one of the reasons I decided not to pursue a career in university administration, as many of my collegiate mentors did and some of my peers plan to.

A university, no matter how good it is at what it does, will always be too big for any one individual student. A sorority or fraternity can be much the same way. Some responsibility must always fall on the individual. Robbins’ book isn’t a condemnation of universities though: that would be patently ridiculous. Well no— that would be a very different book, by its nature more nuanced, but theoretically possible. For some reason though, Americans can accept sororities and fraternities as cultural villains.

What if I told you that while I was in college, I had a fraternity brother who WAS this guy? And he wasn’t a bad person and it wasn’t our fraternity that made his choices for him?

A bit of a personal touch here. My experience in college was as not just a member but a founding member of a multicultural fraternity. Robbins actually takes some pages (240-247 in my edition) to address this subset of the Greek community. In fact, my little Greek niche is portrayed rather positively compared to the teardown of “traditional” sororities that occupies the rest of the book. However, it’s hard to shake the feeling that black and multicultural organizations were largely of no interest to Robbins. We comprise two percent of the book, and serve little purpose beyond being another tool to body the traditional sorority system.

Alexandra Robbins hasn’t offended me personally, nor has she slandered an organization that I have strong ties to. What she does do, however, is come off like an overbearing parent who just can’t quite grasp their child’s point-of-view, despite trying and trying and trying so hard.

The back of the book quotes a review from The New Republic (online) which says: “Every parent of a college-bound daughter should read this book.”

Bad advice. The book is scary, unbalanced, and incomplete. It feels very parental; but parents should be seeking unique voices to supplement and challenge their perspective, rather than those which just reinforce already existing ideas. Parents should seek to understand their children, not judge them.

A journalist to the end, she includes 338 footnotes in the book, referencing and proving her exhaustive research; presumably a shield against accusations of falsity. Again though: Robbins isn’t lying. She’s just being obtuse: whether deliberately or not, I can’t tell. Research can only go so far; and although Robbins did go undercover, closely following with four sorority girls throughout the year, her book still feels lifeless.

“MOST OF US WHO HAVEN’T EXPERIENCED SORORITIES FIRST-HAND WILL READ PLEDGED SIMPLY TO SAY, “I KNEW IT!!” — WHICH IS PRETTY SATISFYING FOR ABOUT 60 PAGES. BUT THEN THE GLOATING STOPS, AND THE BARRAGE OF DATES AND MIXERS AND ANOREXIA AND ALCOHOL AND PSYCHOLOGICAL CRUELTY AND GOOFY RITUALS STARTS TO FEEL VERY DEPRESSING AND VERY DESPERATE”

This is a fairly accurate assessment of “Pledged: The Secret Life of Sororities.” The thing is, no one who was in a sorority who would describe the experience as “very depressing and very desperate.” Any journalistic profile which doesn’t properly convey the attitude and experience of its subject is a failure, plain and simple.

UPDATE: August 2015— I’m noticing a lot of new search traffic coming in for this post. I am making an educated guess and attributing this traffic to college freshwomen who are considering joining a sorority, or were perhaps gifted this book on their way to college. My advice to you: DO IT. Joining a social group on campus will improve your connection to your college 100 times over. You will grow as a person, and have experiences you would never have otherwise. BUT: make sure to choose an organization which you feel comfortable in. Often, you cannot tell this from a week of exquisitely programmed rush events. If you are unsure, wait. Take a year and observe from the outside. There’s no rush, and you definitely DON’T want to end up like some of the women described in “Pledged,” who feel trapped by an organization they don’t particularly LIKE. There’s plenty of time in college, especially during your first year. Make sure to get a variety of experiences before locking yourself into something which, for better or worse, does last for life.

Also, if you’re inclined to purchase the book, please do so through my affiliate link so I can earn a few pennies 🙂 [actually, if you need to do any amazon shopping at all, please click that link then do it—it’s no more effort for you, and then I make commission! win-win]

2 thoughts on “The problems with “Pledged: The Secret Life of Sororities””