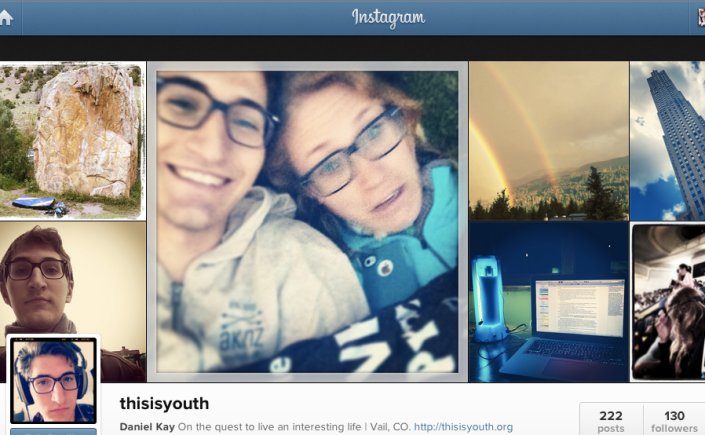 I generally eschew social media trends. Some innate voice inside me convinces me that the wisdom of the masses is a fallacy- that the masses are idiots- and I generally refuse to join in. I’ve been called a hipster. And an asshole.

Despite this aversion, the recent #100HappyDays trend caught my eye. I’ve been making an active effort to be more positive and happy ever since I watched depression tear a pessimistic hole in them life of someone I loved. Although clinical depression is not something that you can just “shrug off” by “smiling more” or “trying to be happy,” as someone one the outside looking in through the frosted glass of the disease, it’s really hard not to view it that way[1].

So although it was not a viable strategy for my ex-girlfriend, ever since I saw her life collapse around her, I have made a point of smiling more, and trying to do the things which make me happy on a regular basis. Some days I am successful. Some days the pull of routine or of pedestrian concerns is too much, and I go to bed without much to look back on.

Most of us cannot spend every day on jagged mountain peaks[2]. There’s nothing wrong with that; indeed, the realization that life is long and dreary and full of mundane moments is an important part of growing up. But, as David Foster Wallace[3] said in that immortal commencement speech: the real work of life is in choosing how we experience our day-to-day.

Wallace, as a point of record, suffered from severe depression and anxiety his entire life. In 2009, four years after giving that speech, he committed suicide[4].

Finding joy in the day-to-day is really what #100happydays has been about; at least for me. Today marked my 50th day of participating in the #100happydays challenge. I posted a rather shoddy picture of the three baby deer who joined me for dinner. I don’t expect a lot of likes. I don’t like the picture that much. The iPhone camera doesn’t have the zoom to pull off good wildlife photography.

That doesn’t matter though. What mattered was the twenty minutes I spent watching the deer from my porch. I talked on the phone with my mother, something which I should do more. The sun set sagely, and I ate a surprisingly good reheated meal; leftovers from a homemade dinner my girlfriend had cooked two nights back, when we entertained some friends. It was a good moment.

On the other hand:

I had leftovers for dinner. I easily could blow by the moment; complain about any number of things that happened or didn’t happen today. Places I could be or people who haven’t contacted me. Why bother though?

If you are living the sort of life where you cannot find one moment a day which is worth remembering, I think you need to reevaluate your motivations. Too often we just get trapped in the motions, without any motivation.

The pictures I see on my Instagram profile remind me what makes me happy. I see the same things recur, here and there, although I’ve been making an effort to keep things varied. I see rock climbing; I see my partner; I see scenes of natural beauty; I see adventure. I see the things I want to post in the future, and I have to say that this is a trend I can get behind.

[1] (This is, of course, part of the vicious Catch-22 in which depression patients are stuck. They feel as if no one understands them or wants them around, which depresses them further, and makes them more difficult to relate to. Of course no one verbalizes this, or confirms it to those in the throes, but everyone understands it. There’s just an innately understood agreement to talk around it.)

[2] In another life, I would be a sponsored European mountaineer, and I could spend all of my time with my head in the clouds. Until I died tragically young, a rope sliced by fate sending me to my doom; a hero’s death or an idiot’s. The line has never been clear to me.

[3] A personal hero of mine, as you might infer from the endnotes.

[4] “Well I can see why he committed suicide,” a creative-writing classmate of mine said after being forced to read this commencement address for an assignment. I cringed, quietly in the corner.

One thought on “50 Happy Days”