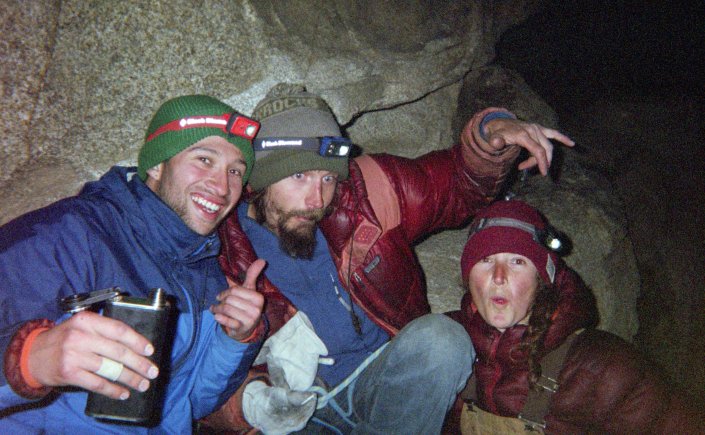 I want to talk to you today about disposable cameras. Yes, those 24-shot, zoom-less, little green boxes you remember from family vacations in the early 2000s. Yes, film cameras!

I hear you laughing: They still make those?

END_OF_DOCUMENT_TOKEN_TO_BE_REPLACED

As our Nepal story winds down, I need to position this website to move into its next phase. There will be a next phase, don’t you worry.

Part of that work is consolidating my audience, making it easier to reach you and market to you when I need to do so. (Gross, I know).

As such, I have two new social initiatives:

You can also follow me on Instagram at @thisisyouth — those are the photos you see in the “Pieces of Life” Column on the right.

Anyways, just housekeeping today! If all has gone well, I’m at Denver International, about to catch a plane. 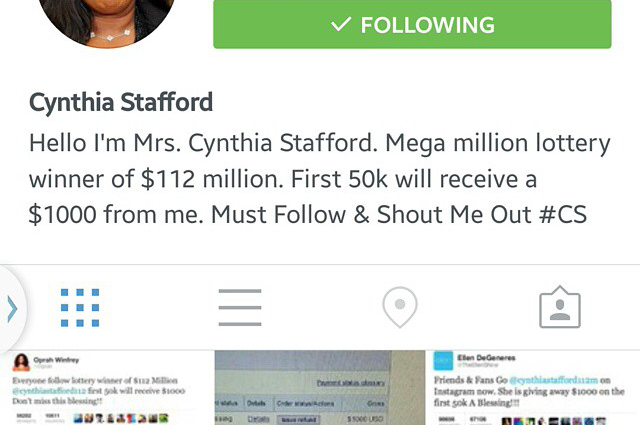 Today my social media feeds were overrun with this:

An identical gambit is running on Twitter, with similar success. Let me be clear. This is not real. People don’t just give away money like this.

This is a scam.

More to the point, you can avoid falling for things like this with a little bit of simple detective work.

If something seems to good to be true, it probably is.

Money can make people blind enough to forget his basic piece of motherly advice. Let me be your Internet mother for a second:

Let Me Google That For You

The first thing you should do when faced with a dubious claim or offer is to GOOGLE THE PERSON OR COMPANY. For instance, Googling Cynthia Stafford turns up a Forbes article which reveals she won the lottery in 2007, and her official Twitter account. OH HEY LOOK, her Twitter handle is right there on the search results page: @visualizewithme.

This particular scam is gaining credibility by posting images of well-known celebrities such as Oprah Winfrey and Tyler Perry endorsing the giveaway on social media. The only problem is that these images are doctored. Poorly, at that. 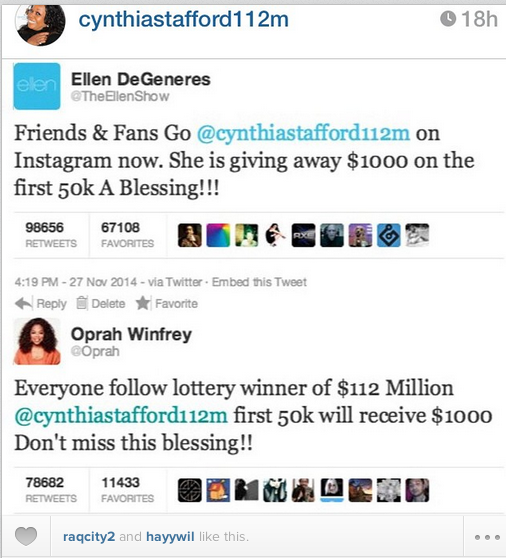 Anyone who is familiar with Twitter should be able to spot the issue with these Photoshopped tweets. If you are not familiar with Twitter, let me help you out: There is no blue checkmark to show that the accounts are verified. The verified account system exists to prevent exactly this sort of fraud.

Besides the tweets not showing the verified account checkmark (which can easily be photoshopped), notice that both messages use extremely similar language. This is another red flag; as someone who has worked as a social media manager before, you need to try and be creative when repurposing the content of others. You would not see two major brands with such similar style. 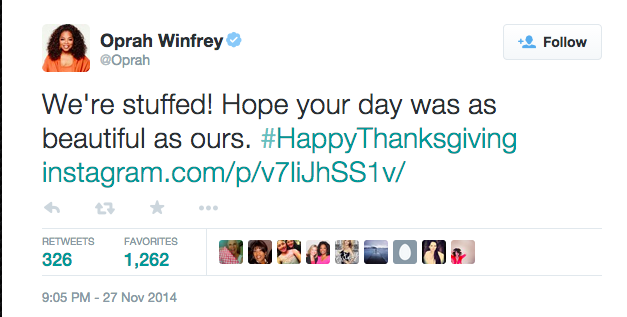 Noticed the blue checkmark, which indicates that Twitter has manually verified this account is in fact operated with the consent of Oprah Winfrey

These scams use money to lure in followers

They also cleverly use you to spread the message and recruit others by asking you to screenshot the promotion and tag your friends. This is viral marketing at its most pure. You are spreading an erroneous message exponentially; your friends are more likely to spread it themselves because they trust the source of the message— you.

Once the account has accrued as many followers as the scam will allow, it will change its handle or its focus. Sure, it will no doubt lose many followers who realize the deception, but many, many people will simply ignore it or forget how they ended up subscribed. From there, the scammer has a captive audience much bigger and much more quickly than they could have built it organically.

Just a basic bit of education for everyone out there who doesn’t know or use these steps. I hope you’ll be a bit more critical and informed going forward!