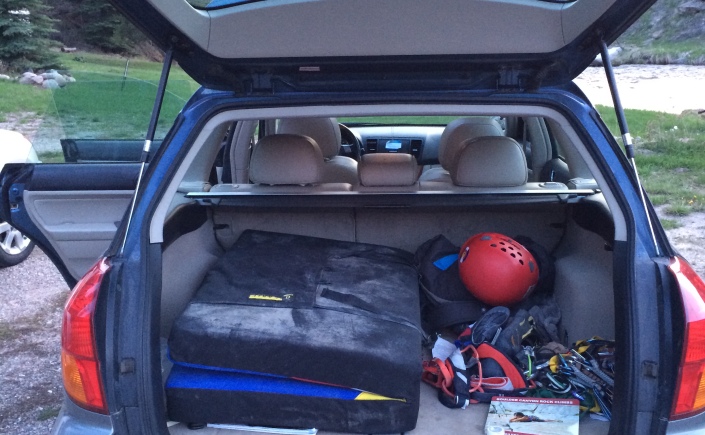 May is almost up, and if you’re anything like me, you’ve spent the month watching high school and college graduations go by: either in-person, or on social media. Caps, gowns and sashes flashed by in a blur— and the requisite binge drinking which soothes the thought of the future from the fresh graduate’s mind sloshed a veneer of fun over the whole thing.

Under the jubilation: the common, slinking, cultural understanding that the degree is going to be more of a burden than a boon, at least for the first half-decade or so. Student loans, a lack of experience and an eminently poor job market all linger on the sides of the millennial consciousness.

“I Just Graduated, Now What?” is the question du jour.

No one I know, except the engineers, is excited about graduation. Even they are subdued, but then again: they are engineers.

Life looks hard from the commencement stage, but not for climbers. For the dedicated dirtbag, commencement still holds the old promise: a new life, about to begin. For the graduating climber, the world awaits.

A few words of advice:

With hard work and dedication, you too could own a used Subaru Outback full of warm beer and climbing gear. And you can park that Subaru Outback anywhere where rocks are to be found. Boulder, Colorado; Red Rocks, Nevada; Yosemite, California; and everywhere in between.

The outdoorsy young person is maybe the only type person who can still have a childhood, post-graduation.

For you, success is not measured in terms of health benefits or a 401k, success is measured by the amount of ticks in your guidebook and the amount of miles on your odometer. A dirtbag life is about living, and occasionally boasting to your friends on social media.

A few weeks ago, at the Sticky Fingers Café in the tiny town of Minturn, a man, a stranger, waved me over and said, “Tell me your story.”

“Trying to live an interesting life,” I told the man. I watched his rough and wrinkled brow knot together and unwind for a smile. “What’s yours?”

“Just an old climber bum,” he said with a wry, far-off look. “I live down in Bueny [Buena Vista], climb as much as I can.” The man, approaching 60, sat and spoke with use for half an hour. He was on his way to do fieldwork with some college students in Indian Creek, Utah.

“Me and my friends, we just wanted to climb as much as possible. So we got jobs as teachers, and got summers off,” he said. “Which let us roam all across the country.”

Now, he says, he tests outdoor apparel for gear companies. You could do that too, he tells me, when I say that I am experimenting with adventure writing.

His email address is perfect: climberdan@yahoo.com*

“If you’re every in Bueny, just stop by the coffee shop and ask for climber Dan,” he says. “They’ll point you in the right direction.”

And he is right, I know. A climber who is willing to pursue their passion and work hard in the meantime has more avenues to live a fulfilling life than at any other time in history. In fact, adventure-minded people who are willing to document and share their lives have more avenues to success than many college graduates. For a generation obsessed with flexibility, individuality, and freshness, Dan is the model. That is the right direction.

Vail, where I live, is full of college graduates unable to find their fields, living their lives shuttling between front-of-house, back-of-house and the bar. It’s not a bad life, by any means. But no one lasts long here. A season or two, and then on to fresher pastures.

Real people live in New York City, where I just applied for a job with Snapchat.

“Never have I been so stressed as when I lived in Brooklyn,” my new friend Roxi tells me, 12:30 a.m., at Altitude Bar and Grill, my favorite bar in Vail. My departure has been delayed by a triple-overtime game between the Chicago Blackhawks and the Anaheim Ducks. Roxi’s departure has been delayed by the “bear fight” she just consumed: an Irish Car Bomb immediately followed by a Jaeger bomb.

She becomes more and more friendly as she degrades. “I just can’t make it out here anymore, so I’m headed back to Brooklyn for a while, I guess,” she says. She does not sound happy.

I want her life. When I tell her that I write on my own schedule for a living, she gets a little sad.

“We’ll never study what he studied,” she tells her drinking partner. “We’ll never have his life.”

Her partner studied videography and production. He waits tables, and does not believe me when I say a ski town offers plenty of opportunity for sports videography.

“WHERE?!” he says, exasperated. He does not see the opportunity is all around him.

Many college graduates do not see the opportunity all around them.

I studied English, a much-maligned degree. I am employed, in my field, with flexible hours and a good life. I am 22; a fact that many in this town react to with disbelief.

A few rules I learnt from climbing:

You learned to climb by climbing. No one paid you much attention until you knew how to do a thing or two. And that’s fine: that’s just how things work. You wouldn’t expect people to take you seriously until you had spent some time learning the literal ropes.

Here’s the thing: while you learned to climb for free, on your own time, for some reason you expect to get paid to learn how to do your job. You will never be sponsored until you can climb above 5.12, the same way you won’t be hired without experience and passion.

5.12 doesn’t come easy, and neither does a career. Your diploma is worth no more than your belay certification at the gym.

Work for free, and connect your work to your passions. Build a portfolio, do a project with a friend; showcase your ability to do something besides write resumes. Every climber in the gym can point out the sequence of moves for the V10. How many can actually perform it?

Outdoors folks don’t tend to care much about money. The simple fact about pursuing the outdoors is that even though most activities are free, they come at a tremendous opportunity cost.

My boss, millionaire angel investor Jason Calacanis, does not spend much time outdoors. I eavesdrop on his life through Twitterm and occasionally he deigns to speak to me. He is too busy, making too many deals and attempting to simultaneously satisfy too many people to make time for his soul.

I am sure he is very happy– or at least fulfilled– but he is a very different sort of soul.

Why should this be any different for your work?

But I’d still like to live in Brooklyn for a few years.

Best of luck as you work on the project that is your life.

Be assured: you will send. Enjoy the work.

One thought on “A Commencement Speech for Climbers”